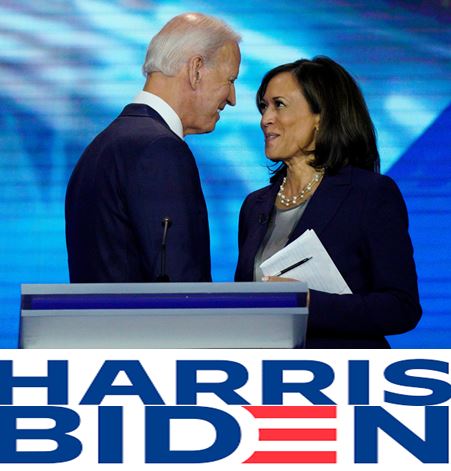 Don’t get mad at me. Both of them have described their ticket this way. Harris caught herself more quickly than Befuddled Joe did, but the fact that they have made these slips makes it clear to me that this is something they have discussed. Jesus said, "A good man brings good things out of the good stored up in his heart, and an evil man brings evil things out of the evil stored up in his heart. For the mouth speaks what the heart is full of." (Luke 6:45)

Why would poor old Joe be OK with being a figurehead while the evil Kamala runs the show? For the same reason he submitted to the orders of his puppet-masters and put her on the ticket in the first place.

Does anyone really think he “chose” her? He hates her. She humiliated him on national TV during the chaotic Democrat debates. She called him a liar, a racist, and a sexual predator. That fact that her assessment was correct didn’t make it any better for Creepy Joe. He simply would not have named her his running mate without being forced to do so.

Why would he choose her – even if he didn’t despise her? Presidential candidates typically choose their running mates for one of two reasons. Either he or she has a big following; or can help the candidate bring home a state. Well, no one in her party has anything good to say about her. She is mean, spiteful, and disloyal, according to those who know her best. So she only managed to get an average of 2% in the Democrat primaries she ran in before she was forced to drop out. And she can’t bring Biden California; it's already in the bag. Like New York, the Democrats who run California would vote for Satan if he were the Democrat nominee.

It doesn’t take a political genius to see what’s going on here. In exchange for getting Bernie Sanders off his back and buying him the nomination, the shady cabal who decided to make Biden the nominee did so because he is so pitifully controllable. Democrats – you didn’t really think you chose Sleepy Joe as your nominee, did you? Multi-billionaires decided he would serve their purposes – particularly in the area of helping them make bullions form China. The soulless George Soros is usually considered the string-puller in the machinations of the Democrat Party, but I have become convinced that there are other obscenely rich power-hungry men who use Soros as their front man. They don’t like to be seen by the masses because they don’t want people to see the horns on their heads.

So this is the way I see their check list:

Muzzle Bernie Sanders by promising him his Green New Deal and other inducements. CHECK.Play on Biden’s pathetic obsession with becoming president after running for the office for decades by promising him he would get to sit in the big chair in the Oval Office – at least for a few months. CHECK.Threaten him with pulling funding for his campaign and replacing him on the ticket if he gets out of line. CHECK.Forcing him to accept the despicable Harris on the ticket. CHECK.Get Harris-Biden elected through the use of lies, public disinformation, and massive voter fraud. IN PROCESS.Tell Biden who he has to name as his Cabinet. (Very important, so I suspect this has already been done.) PROBABLE CHECK.After three to six months, tell Biden he has to retire “for medical reasons”. If he balks, threaten him with the 25th Amendment. (That’s why it is important the secret government of billionaires name Biden’s Cabinet. A majority of them would have to vote to remove him from office.) PLANNED, BUT NOT YET IMPLEMENTED.

Finally, let Harris take over as president. She would make history as the first female president; the first female black (sort of – she’s half Indian) president; and quite likely the first demon-possessed president.Proceed to turn the United States into a Socialist nation that will give up its sovereignty to a globalist system run by the secretive, shadowy,  sinister freaks who have been charged by Satan to implement  this plan that was hatched in the pits of hell. PLANNED, BUT NOT YET IMPLEMENTED.

I believe their malevolent plan will fail. Tens of millions of Americans are praying for this takeover of America to fail. Many millions more who don’t pray, including many Democrats, are finally seeing the terrible damage Harris-Biden would do to our nation. Almost half a million Americans have joined the Walkaway campaign of former Democrats who could no longer stomach the lies and corruption that are the hallmarks of their former party.

Here’s the way I see it. If the Christians of America will do as we’re told in 2 Chronicles 7:14, God will heal our land and defeat the plans of the Evil One. If, however, we refuse to humble ourselves and pray with everything that is within us, we will deserve the devastation that will accompany a Harris-Biden win on November 3. Either we will be humbled by that terrible prospect, or we will humble ourselves and avoid it. The real Christians of this country will decide the fate of our nation, and it won’t be at the polls. It will be in our prayer closets.

2 Chronicles 7:14: “If My people who are called by My name will humble themselves, and pray and seek My face, and turn from their wicked ways, then I will hear from heaven, and will forgive their sin and heal their land.”