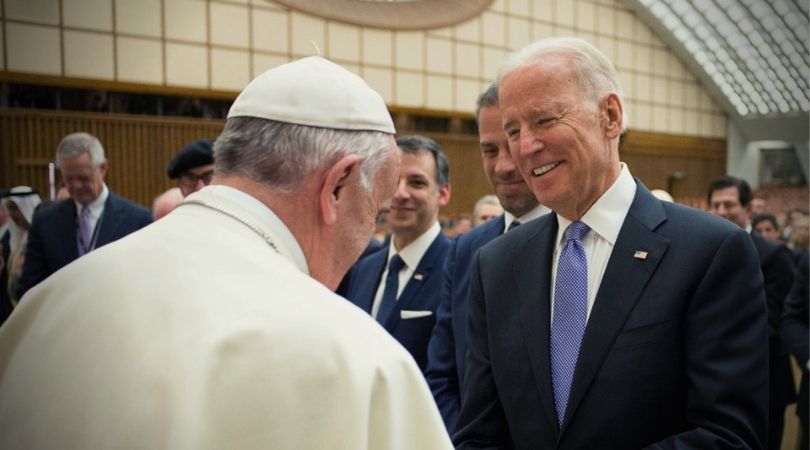 I am not a Catholic, nor am I an expert in Catholic doctrine. But I know that millions of Catholics were shocked to hear their Pope come out in favor of homosexual marriage this week. In a documentary released Wednesday, October 14, 2020, he said, “Homosexual people have the right to be in a family. They are children of God.”

Of course the Vatican public relations unit went into immediate damage-control mode. “The Pope didn’t mean homosexual marriage is permissible. He was only referring to ‘civil unions.’” But look at the Pope’s actual words. He spoke of ‘family.’ Marriage is the very basis of a family. He went on to say, “You can’t kick someone out of a family, nor make their life miserable for this,” Francis says in the film. “What we have to have is a civil union law; that way they are legally covered.”

But what is the actual difference between the two? If the Pope approves of civil unions, they are nothing more or less than marriages with a different name. “Well, marriage is in the church, and civil unions are secular.” That is a distinction without a difference. Many Biblically legitimate (heterosexual) couples get married at a courthouse rather than in a church. Are they married?

Civil unions are – and always have been – a back door to full legitimization of a sinful union. States that eventually legalized homosexual marriage typically started with legalization of civil unions. It’s the same strategy Democrats have used to legalize drugs. First comes medical marijuana, then recreational marijuana, then the next thing you know cocaine and heroin will be legal. The most frightening thing about homosexual unions or marriages is that they have opened the door to homosexuals adopting children in all 50 states – giving them the power to indoctrinate innocent children in their perversion of God’s design for families.

The Pope is an intelligent man. He knows all this. Yet he has trashed 2,000 years of Catholic doctrine without even consulting his cardinals. The Bible says there is safety in a multitude of counselors. Every spiritual leader worth the title surrounds him or herself with doctrinally sound counselors and advisors. But Francis did an end-run around them with this outrageous break with the Bible and his church’s doctrine when he made this statement to a secular reporter.

This is not the first time he has expressed support for acceptance of the destruction of the family by approving homosexual marriage. He has made many statements in the past that have indicated such support. He has just never declared it so blatantly and defiantly.

Conservative Bishop Thomas Tobin of Providence, Rhode Island, called for clarification. “The pope’s statement clearly contradicts what has been the long-standing teaching of the church about same-sex unions,” he said in a statement. “The church cannot support the acceptance of objectively immoral relationships.”

A 2003 document from the Vatican’s doctrine office stated the church’s respect for gay people “cannot lead in any way to approval of homosexual behavior or to legal recognition of homosexual unions.” Doing so, the Vatican reasoned, would not only condone “deviant behavior,” but create an equivalence to marriage, which the church holds is an indissoluble union between man and woman. That document was signed by the then-prefect of the office, Cardinal Joseph Ratzinger, the future Pope Benedict XVI and Francis’ predecessor as Pope.

Francis has also refused to halt the church’s practice of allowing open homosexuals to serve as priests, thereby endangering the lives of millions of children. You would think he would have learned better after thousands have come forward after being sexually abused by homosexual priests. The church has paid millions of dollars, first in an attempt to hide this sin, and finally in lawsuits when it all came to light. Yet the Dean of one Catholic Seminary has stated that half his students are homosexuals. Francis has the power to return his church to a Biblical path, yet he continues to defy centuries of church doctrine.

A Biblically conservative group of Catholic priests and theologians called for Pope Francis to be declared a heretic because they believed he has softened the Catholic Church's stance on major moral issues. On the website LifeSiteNews they issued an appeal to the College of Bishops to denounce the pontiff and even consider stripping him of the papacy if he does not show "true repentance." (See Article below, “Pope is a Heretic Because Of His Views on Homosexuality and Abortion.”)

Based on the contents of the Pope’s 2016 document “amoris Laetitia,” the Catholic priests stated, "Pope Francis has protected and promoted homosexually active clerics and clerical apologists for homosexual activity. This indicates that he believes that homosexual activity is not gravely sinful."

They also said that the Pope had "failed to speak a word in support of popular campaigns to preserve Catholic countries from abortion and homosexuality, for example, before the referendum to introduce abortion into Ireland in May 2018."

"We take this measure as a last resort to respond to the accumulating harm caused by Pope Francis's words and actions over several years, which have given rise to one of the worst crises in the history of the Catholic Church." Since Francis has become Pope, attendance at Mass has dropped worldwide.

So how does this amount to the Pope trying to influence the US Presidential Election in favor of Joe Biden? It is well-known that Joe Biden, who claims to be a “faithful Catholic,” has been denied communion (ex-communicated) for the sin of promoting abortion against Catholic doctrine and law. (See article below, “Biden is Denied Communion as Required by Catholic Canon Law.”)

So when parish priests, under the direction of their Bishops, have denied to serve communion to Joe Biden because of his very vocal support for the murder of unborn babies, they effectively ex-communicated him. Most think of excommunication as simply kicking someone out of a church. But the definition of Excommunication in Catholic doctrine is, “The action of officially excluding someone from participation in the sacraments and services of the Church.”

This is far more serious than merely saying, “You can’t attend our church anymore.” When Catholic priests have refused to serve Joe Biden Holy Communion (see link below) they have actually excommunicated him. They have declared him to be ex (Latin “out of”) communio (Latin “communion”). In other words, he is no longer a part of the Roman Catholic fellowship.

In the canon law of the Catholic Church, excommunication isthe principal and severest censure. It is a spiritual penalty that deprives the guilty Christian of all participation in the common blessings of ecclesiastical society. Being a penalty, it presupposes guilt; and being the most serious penalty that the Catholic Church can inflict, it naturally supposes a very grave offense. The excommunicated person is basically considered as an exile from the Church and as non-existent, for a time at least, in the sight of ecclesiastical authority. The Church regards the excommunicated persons as having the status of that of a stranger.

So politicians who defy Catholic doctrine are ex-communicated for their support of abortion because of the influence they have on the public. So the question becomes, what is the difference between that and the Pope defying Catholic doctrine by legitimizing homosexual marriages or unions?

In an election during which his Bishops have declared that any politician who supports a pro-death, pro-abortion position may not be served Holy Communion, this is the ultimate hypocrisy. By any measure, the Pope is the highest-ranking politician in the Roman Catholic Church. Since he is the Head of State of the Vatican, which is a sovereign nation, he cannot claim otherwise.

So, a politician like Joe Biden who defies Catholic doctrine is given the ultimate punishment the church can administer. But the Pope himself does the same – and he’s still the Pope.

The timing of this, with the revelation of his support for an act that the Bible and Catholic doctrine declare to be a grave sin, is more than suspicious. Just days before the Presidential election the Pope’s statements become public, giving Biden cover for his sin. “If the Pope, the head of his church, can publicly oppose Catholic doctrine, how can Joe Biden, a lowly politician, be criticized for doing the same?”

The Pope has made it crystal clear that he despises President Trump. He has said that Trump is “not a Christian” due to his policies of preventing illegals to enter the United States. He also accused our President of “Pro-Life Hypocrisy,” when he, as a Head of State, criticized U.S. domestic policy regarding the DACA program. (Obama illegally created the program by Executive Order, when it was clearly a matter for Congress. Trump simply rescinded the Order, which presidents routinely do if Congress has not enshrined them in law, and demanded that Congress do its job.)

The Pope butted in, and in a twisted sort of logic, decreed that Trump’s action regarding an immigration question meant that his Pro-Life stance was somehow “hypocritical.” But, even though U.S. Bishops and priests have denied Biden the ordinances of the Catholic Church for the sin of using his high political office to actively promote Pro-Death legislation, the Pope has never said a word about Biden.

There is no doubt that the Pope has made a last-ditch effort to rehabilitate Biden’s image as a faithful Catholic at a time when the Bishops, the Catholic rank and file, and Evangelicals have serious questions regarding whether he has any faith or morality. (See article below, “Biden's Bogus Appeals to Evangelicals.”). The question is “Why?”

It may just be that Biden claims to be a “faithful Catholic,” and that Trump is Protestant. I hope that is the case, and that this is not just an extension of the petty insults he and Trump have exchanged. This election is far too important for that.

In any case, it is a violation for international norms for a Head of State, much less the leader of one of the world’s largest religions, to attempt to influence the outcome of another nation’s election. I only hope that American Catholics will realize that their Pope is out of line in more ways than just his stance on homosexual marriage. I hope they will realize that he has no right to take sides in a US election.

Donald Trump is without question the most Pro-Life president the U.S. has been blessed with in decades. And numerous Pro-Life Catholic and Evangelical groups have denounced Biden-Harris as 'Most Pro-Abortion Ticket in History'. (See article links below.) What will it take for the Pope to realize he has backed the wrong horse in this race?

Pope is a Heretic Because Of His Views on Homosexuality and Abortion
https://www.newsweek.com/pope-francis-denounced-heretic-and-accused-1412580

The Faithful Resistance to Pope's Call for Same-Sex "Unions"
https://www.returntoorder.org/2020/10/faithful-resistance-to-pope-franciss-call-for-civil-union-laws/