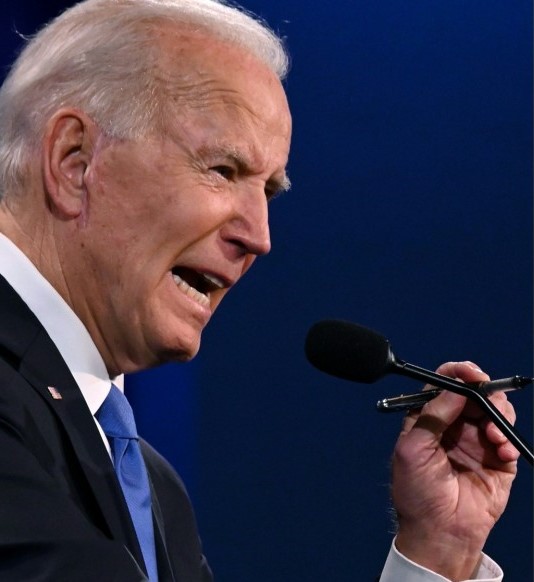 As my wife and I watched the last presidential debate, we were shocked when Joe Biden said a horrible thing. She said, "That man just cursed our nation!"

I realize that some who don’t know the Bible will ridicule the statement that, "Joe Biden Put a Curse on America." The phrase immediately brings to mind Voodoo priests in Haiti and Louisiana who make straw dolls of people they want to curse, and stick pins in them.

We're talking about something entirely different here. Biden put a spiritual curse on our nation during the  debate when he intoned, "We're about to enter a Dark Winter…a Dark Winter. 200,000 more Americans will die before the end of the year."

Even if we ignore the spiritual aspect of his lie, you have to ask yourself, "Who does something like that? Who stokes the fear and panic that already grips some Americans by predicting a horrible winter in which as many people will die in the next two months as died in the previous ten months?" Obviously someone who is so desperate to become president that he is willing to scare Americans into having heart attacks or strokes due to the panic porn he pushes. Put another way, a man so selfish that he is willing to hurt others to attain his goal.

Words have power. God spoke the world into existence with His words. The Bible says in Deuteronomy 30:19, "I call heaven and earth as witnesses today against you, that I have set before you life and death, blessing and cursing; therefore choose life, that both you and your descendants may live." In Amos 8 God makes it clear that He hates inflation, and cursed those who created it. He was talking to the merchants who "decreased the bushel" and "increased the Shekel" (a classic definition of inflation). He said that in doing so they "trampled the poor" and then uttered the dread words, "I will never forget what you have done."

Jesus cursed evil. In Mark 11, Jesus cursed a fig tree that did not bear fruit. (This was a lesson directed at people who had a religion of works, but bore no fruit.) It immediately withered and died. In Matthew 15:4 He said, "He who curses father or mother, let him be put to death." He also cursed the Pharisees in Matthew 23:13. “Woe to you…Pharisees, you hypocrites! You shut the kingdom of heaven in men's faces. You yourselves do not enter, nor will you let those enter who are trying to.”

Well, Joe Biden is certainly not God, so do his words have any real power? Look at James 3:9-10: "With our mouth we bless our God and Father, and with it we curse men...Out of the same mouth comes blessing and cursing." This indicates that mankind can both bless and curse others.

"All right, maybe that's true," you might say. "People can bless or curse others. But what power do those blessings or curses have?" Much more than you might think. For instance, we curse ourselves when we say, "I'm going to die in my 50's because both my father and grandfather died at that age." Or we might speak a blessing over ourselves: "I believe in divine health. I will live a long and healthy life." In either case, what you say is what you get.

I have witnessed many people who were bitter and vengeful, and who curse themselves and others, die early deaths. In particular, doctors will tell you that bitter people are much more likely to suffer from certain diseases, while positive, loving people who bless themselves and others live longer, healthier, and happier lives. (See article links below.)

It all boils down to whether people believe in a blessing or a curse. I mentioned Voodoo priests who curse people. Some of those people actually die soon after the curse is made against them. Why? Fear made them have a fatal heart attack because they believed in the curse. The Voodoo priest, even though he works for Satan, doesn’t have the power to kill anyone in this way. But his or her words are powerful – when people believe them.

And therein lays the problem. Joe Biden has no power, but his words have power with half the people of this nation. He is the head of the Democrat Party. That gives him authority over Democrats. He is a presidential candidate. That gives him a platform that allows him to speak blessings or curses that are heard by millions.
So when he said on national television that, “We’re about to enter a Dark Winter…a Dark Winter,” and that “200,000 more Americans will die by the end of 2020,” he was virtually cursing America. Again, he is just a man. But his power to curse our nation is greater than most men because of his authority and his large audience.

I believe many who believe his terrible words could die as a result of them. Both when I was a young paramedic and later as a pastor for more than four decades, I have been at the side of many people who died - because they believed they would die. They just gave up. On the other hand I have been with people much more ill or injured who lived – because they believed they would live.

I am one of them. I was taken to the emergency room years ago where they found I had 26 kidney stones. I was in total renal failure, and the doctor told me I probably wouldn’t make it through the night. My wife asked if I wanted her to stay the night with me. I said, “No. Go home and take care of Sarah. Tell her Daddy is being healed. I promise you I will be here in the morning. And I was.”

The horrific thing about Biden’s curse on our nation is that it caused some people to lose hope. It’s bad enough that he has spent the last nine months creating unnecessary fear and panic. That has been emotionally devastating to millions of Americans who believe him. But his worse sin is taking hope away from many people who are fragile or elderly. He has in effect pronounced a death sentence against them.
President Trump’s blessings on our nation in the same debate stood in stark contrast to Biden’s curse. He recently announced that, although he was born into a family from a liberal, ritualistic denomination, he now considers himself a non-denominational Christian. That showed in his optimistic assessment of the nation’s future regarding the China Virus. He blessed us by pointing out that the death rate is extremely low, and dropping every day. He blessed America by declaring that we would be free of this evil plague. In other words, he gave hope.

To paraphrase a verse I quoted above, we have before us in this election a choice between blessing and cursing. I choose blessing.


INTERNET RESEARCH:
“Ludicrous” Statements Biden Made During Election (Including “200,000 Will Die by End of Year”)
https://www.youtube.com/watch?v=PYel_Pfu3ks&ab_channel=SkyNewsAustralia