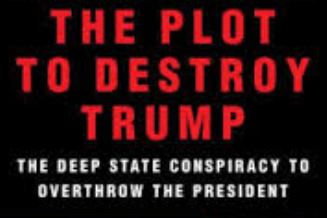 The plotting began on November 9, 2016, the day after President Trump’s landslide victory over Hillary Clinton. The Democrats and Socialists - who were so sure that Hillary would win - cried, screamed and cursed God. Then they went through four of the five stages of grief:

Denial. “This can’t be happening! All the polls said Hillary would win.”
Anger. “Those F****** Idiots who voted for Trump should all be shot.”
Bargaining. “God, if you you exist, please get rid of Trump and I’ll stop cursing you. I’ll even go to church."
Depression. They consumed illegal drugs, alcohol, & anti-depressants in great quantities.

The fifth stage of grief is Acceptance. They should have gone through that, because what they did instead is going to earn many of them long terms in prison. Instead, they replaced acceptance with plotting.

Now, I can’t prove that the following happened. But even though I can’t see the wind, I know it is there because I see it moving the leaves on the trees. In the same way, I know that what I am about to describe definitely happened, because we can see the results today.

As soon as they had their emotions (except for Trump hatred) under control, a plot was formulated that would ensure that Trump would be removed from office in his first term; if that proved to be impossible, to rig the election and deny him a second term; and to make it impossible for a Christian or a Conservative to ever win the White House again.

This is their plot…

Their tried-and-true methods of cheating have been used in every presidential election in the last century. Since the dead always seem to vote for Democrats, the only times Republicans have won has been when their campaigns were so effective that they were able to overcome the millions of fraudulent “votes” produced by the Dems.

Although prominent Democrats have stated there has “…never been a case of election fraud in the United States,” that is patently ridiculous. In fact, Democrats have made a science of cheating.

As just one example, in “How to Steal an Election” (see link below) we find this interesting excerpt:

“After his fall from power, the infamous Tammany Hall leader William Marcy Tweed—Boss Tweed—candidly assessed the conduct of elections in his city. His 1877 testimony before the New York Board of Aldermen remains fascinating for its matter-of-fact explication of how to corrupt democracy:

Q: "When you were in office, did the [Tweed] Ring control the elections in the city at that time?"
A: "They did sir. Absolutely."
Q: "Please tell me what the modus operandi of that was. How did you control the elections?"
A: "Well, each ward had a representative man, who would control matters in his own ward, and whom the various members of the general committee were to look up to for advice how to control the elections."
Q: "What were they to do, in case you wanted a particular man elected over another?"
A: "Count the ballots in bulk, or without counting them announce the result in bulk, or change from one to the other, as the case may have been."
Q: "Then these elections really were no elections at all? The ballots were made to bring about any result that you determined upon beforehand?"
A: "The ballots made no result; the counters made the result... That was generally done to every ward by the gentleman who had charge of the ward."
Q: "Can you state now, at this time, whether the election which took place in the City of New York at that time [1868] was a fair and honest election?"
A: "I don't think there was ever a fair or honest election in the City of New York."

Besides the ever always-popular ballot-box stuffing (and its modern electronic equivalents) some other favorite Democrat methods of election fraud include:
Why are these last three so important to Democrats? Felons, illegals, and welfare recipients almost always vote Democrat, because theirs is the party of “free stuff.”

There are many other ways to cheat that we know of. Democrat states illegally changed the election rules just before the 2020 election – a clear violation of laws that govern federal elections. These changes included allowing votes to be counted long after Election Day, providing ample time to see if Biden was in trouble in a state, and then manufacture the necessary number of ballots for him to win. There exists video evidence of trucks pulling up to the back door of ballot counting locations and unloading crates of ballots – at 4AM!

Thousands of ballots were “discovered” in this way – every one of which was a vote for Biden. Of course, that is statistically impossible. In any batch of votes there will be at least some votes for the other candidate (except possibly in Washington, DC). Even more blatantly fraudulent was the fact that the “voters” voted only for Biden – not one vote for any other Democrat. Occasionally a voter may only vote for the presidential candidate, but this is very rare.

I am certain all of these frauds were used in this election, as they have been used in every presidential election in my lifetime and before. I am just as certain, however, that this time the conspirators in the Democrat-Socialist War Room did not depend on them. They used them against Trump in 2016, but he was so popular that he was able to counter all the millions of fake “votes” cast for Hillary.

In this election, several Secretaries of State (the officials whose duty it is to certify election results) admitted that there were multiple cases in which thousands of Trump votes inexplicably became Biden votes. They claim this was a computer “glitch,” not fraud. If that is the case, wouldn’t you expect some Biden votes to be transformed into Trump votes? A friend who is a computer expert assured me that there is no such thing as a “glitch” like this – there is only programming; deliberate programming.

In one case, honest election officials in Detroit refused to certify the results of the count because they observed multiple irregularities in both the election and the counting. After being bullied by other election officials and receiving death threats to themselves and their children, they agreed to change their vote – but only if the Secretary of State conducted a full audit. After they changed their vote, the Secretary refused to do the audit. And even though they had been allowed to change their vote and agree to certification, they were not allowed to rescind their vote after the Democrats reneged on their promise of an audit.

Perhaps the most pernicious form of voter fraud was perpetrated by Democrat election officials who illegally mailed out millions of unsolicited ballots to everyone on their voter rolls. This is totally different from the legitimate practice of absentee voting in which a voter sends a signed request for a ballot, which is then mailed to them. They vote by mail, and their signature is compared to both the voter rolls and the ballot request. There’s very little opportunity for fraud here.

But sending ballots to the address of every voter (some states sent two to each address!) is begging for fraud. The person who lives where the voter used to live can vote using their ballot. Gangs can be hired to steal ballots from mailboxes, or bride or extort the elderly to get their ballots (which can then be sold to “vote harvesters” ).

I believe they concocted many more evil schemes for this election – likely at least twenty different ways to defraud American voters and steal their ability to choose their President. They had to have multiple backup plans. We will probably never discover many of them; after all, they had Billions of dollars with which to conceal their crimes. But even with all that effort, our President still won.

On election night Trump was 100,000 or more votes ahead in several key states. Then the Democrats used their secret weapon – the Dominion voting machines and its software that had been used to steal multiple elections in other nations. Mysteriously, Trump's lead would vanish the next day and Biden would be in the lead – in state after state.

The Electoral College meets three weeks from today, on December 14. Pray that they will vote according to the best interests of the nation. And pray that light will be cast on the crimes of the evil-doers, so that they will scatter and hide. If you’ve turned on the lights in a house that had been unoccupied and watched the roaches scatter in all directions, you know what I mean.

NOTE: The charts below show Trump’s commanding lead at 11PM pm Election Day. Last-minute changes in election rules and fraudulent mail-in ballots gave the Democrats the four days they needed to manufacture enough ballots to steal the election. The chart underneath that shows that Biden miraculously flipped most of Trump’s states after the election – a virtual impossibility in a legal election. 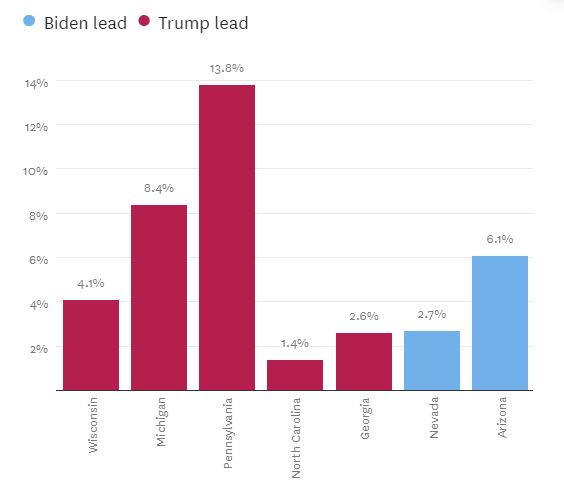 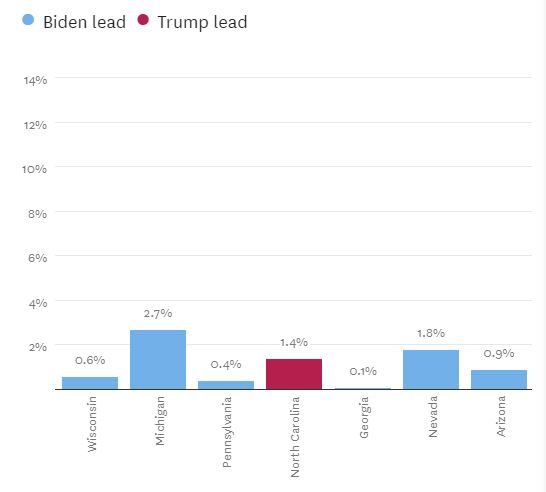 How to Steal an Election
https://www.city-journal.org/html/how-steal-election-12824.html

BallotPedia: Votes Cast in the Names of Dead People
https://ballotpedia.org/Votes_cast_in_the_names_of_deceased_people