January 18, 2021
Tweet
NOTE: My intention in this article is not to offend the good Catholic people of the world, but to expose the hypocrisy of its leadership. I have received many letters from life-long Catholics who share the views expressed here. 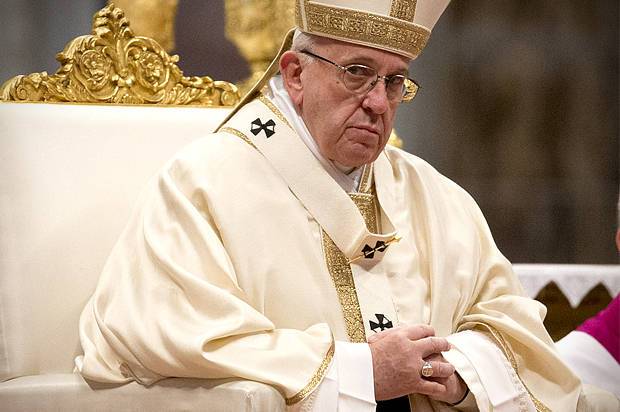 ter a hundred people invaded the US Capitol the Roman Catholic Pope denounced the US government, saying it was not “protecting Democracy.” Yet I do not remember him once condemning the tens of thousands of Antifa, Socialist, and Black Lives Matter rioters who killed hundreds and destroyed billions of dollars of church, government, and private property. He did take time, however, to praise anti-Trump protestors.

Pope Francis is essentially a dictator. He has his own little country, his own little bank, and his own little army. His personal net worth is only $30 Million, but Vatican City, over which he exercises complete control, is worth $15 Billion. But the organization he controls also owns all the millions of Catholic churches and other buildings worldwide. Its net worth of $2.5 Trillion makes it the wealthiest organization in the world.

Vatican City is in Italy, but for ludicrous political reasons dating back centuries, the international community of real nations recognizes it as a sovereign state. But unlike any free nation, he has absolute power. Whatever he pronounces is seen by his followers as the actual word of God. He is supposedly infallible.

He is accountable to no one. Yes, there is the College of Cardinals. But he appoints them, and he can remove any one of them any time he wishes – for any reason or for no reason at all. Does anyone really think that they could reign him in no matter what outrageous thing he might do? Could they remove him if he did something truly awful? Not a chance.

They claim he has this supreme power over “the entire Christian Church.” Protestants would disagree. We proclaim, like the Founding Fathers of America, that there is “No King but King Jesus.” The Bible says in I Timothy 2:5, “For there is one God, and one mediator between God and men, the man Christ Jesus.”

Billy Graham was arguably the most powerful Christian preacher of our time. He was certainly the best known and respected. He could sit down and talk with the President of the United States any time he wished to. And he did speak and pray with every president during his amazing ministry, in which he led millions of people to faith in Christ. Yet he never claimed to have “…full, supreme, and universal power over the whole church.”

So, what do you call a person who has absolute power over a nation, and who is accountable to no one? You call him what he is – a dictator. Throughout history some popes have been better than others. Some were good, humble me. Others were adulterers. Some were murderers, burning people at the stake for having beliefs different than the pope.

Most popes have had the sense to confine their dictates to the Roman Catholic Church, of which the pope is without doubt the head. But some, like Francis, have taken this whole idea of being a head of state to a ridiculous extreme.

A pope is not a world leader. He is the leader of a group of people who voluntarily choose to join the Catholic Church. He is not, as Francis seems to think, the equal of the heads of state of real nations. He should do the job he was elected to do and keep his nose out of international politics. (That is right – he was elected. God did not appoint him. The College of Cardinals voted for him. The fact that it often takes multiple votes before they choose a pope should be proof enough that he is chosen by men, not by God.)

The saying that “Power corrupts, and absolute power corrupts absolutely,” could have been written with Pope Francis in mind.

What about his politics? He was an outspoken Socialist in Argentina. Do you think he changed once he became Pope? No, if anything, he has become even more of a Socialist, with some of his pronouncements straddling the line of outright Marxism. He has denounced Capitalism as evil and has undermined real world leaders of free nations that embraced the only Biblical system of economics - free enterprise. He has called for “structural transformation” of nations that would “restore to the poor what belongs to them.” He believes that ownership of property is “theft,” so it follows that taking the property of others and giving it to the poor would achieve his desired result.

I have long been tired of his constant carping and criticism of the United States and other free nations, while singing the praises Socialist and Communist dictators. While the Roman Catholic Church is decidedly the richest religion in the world, it is not supreme. Protestant churches give vast amounts of money to evangelize the world, rather than hoarding it in gold-plated palaces where the pope sits on a gilded throne like an emperor.

As they say in the South, Pope Francis needs to “stick to his knitting.” Instead of criticizing the US, perhaps he should investigate the corruption in his own church, including the bishops and cardinals who his priests that raped young altar boys. He has apologized for this, but that rings hollow. How about cooperating with the police and putting these monsters behind bars? Or why not have his many cathedrals sell their jewel-encrusted gold treasures and give the money to the poor? After all, the poor were the ones who gave sacrificially so that the cardinals and popes could live lives of luxury like kings.

Then he might have the moral authority to criticize others.

The Dictator of the Vatican – Exposing the Ruthless Side of Francishttps://foreignpolicy.com/2016/04/08/the-dictator-of-the-vatican-pope-francis-amoris-laetitia-divorce-communion/ Against the Catholic Grain: Pope Francis Trumpets Socialism Over Capitalism

Pope appears to back anti-Trump protests in letter condemning populism.https://www.theguardian.com/world/2017/feb/17/pope-francis-donald-trump-letter-condemning-populism