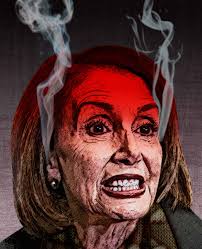 ur elected officials in Washington generally fall into two categories: Politicians (the great majority) and Statesmen (the few who can actually be described as “public servants"). Nancy Pelosi is neither. She is an emissary from the darkest of places. She emanates pure evil. She has a Jezebel spirit.

A Jezebel spirit is defined as demonic influence that creates division, destruction, and chaos through cunning, deception, and seduction.

Jezebel was the wicked queen of the evil King Ahab. She had a reputation for murder, iniquity, and sexual promiscuity. She not only served as a thorn in the side of the prophet Elijah, but she also led Israel astray in their foreign worship of idols (1 Kings 18).

Jezebel worshipped idols and re-introduced them to Israel. She slaughtered the Lord’s prophets, threatened to kill the prophet Elijah, and murdered anyone who protested her introduction of Baal worship into the kingdom (I Kings 18 and 19). She finally met her end when she was thrown from a window by some of the people whose lives she had ruined. There she was trampled to death by horses.

There are many evil people in both parties, but Pelosi is the Queen of Evil. She wields enormous power and would literally kill to keep it. At 80 years of age, after 34 years in Congress, most women would want to retire and spend their last days doting on their grandchildren. Not Pelosi. She is drunk on power. She lusts after it like a heroin addict craves drugs.

Of all her disgusting traits, perhaps the worst is her vindictiveness. She engineered the massive election fraud paid for by George Soros and others. It could not have been done without her collusion. But betraying her nation and committing treason by directing a coup d'état against a duly elected President was not enough for her. Part of her Jezebel spirit is her covetousness for vengeance. President Trump is the only President in the last 20 years who dared to stand up to her. So, in her twisted mind, he must pay – and pay dearly.

With only a few days left in his term, she has tried:
Everything she has done is useless. On January 20th, and not a day before, he will peacefully leave the White House, as he has promised to do. Nothing she has done will change that.

Her intent in all of this is to humiliate President Trump. In the last four years, he has done what she was never able to do (assuming she even cared to). He has brought unprecedented prosperity to our nation. He has reduced unemployment to unimaginable levels. He has brokered peace deals in the Middle East that protected Israel. And he pushed through a vaccine in ten months. (The fastest any vaccine in history was approved was  four years.) And these are just a few of his accomplishments.

We need to pray for our President as we have never prayed before. This evil woman will continue to hound President Trump for the rest of her days unless the Lord muzzles her. She will initiate investigation after investigation of both him and his family. All will be baseless, but all will force him to spend huge amounts of time defending himself.

She will try to get corrupt Democrat prosecutors to trump up criminal charges against him. All it takes is a criminal DA and a few paid “witnesses” to get an indictment. Then he will spend months or years in court. Her lust for vengeance will not be satisfied until she puts him behind bars.