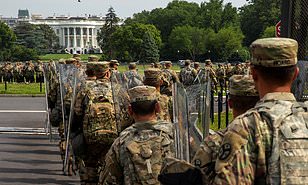 Check this list. If you are listed, under our new Socialist Regime you are a domestic terrorist, a racist, a misogynist, a nativist, a white supremacist – and you need reprogramming in “re-education camp” like those in other Communist/Socialist nations. OBiden has declared war on you if you are an…

By the way, I have given Biden a new name: OBiden. This is appropriate because this will be Obama’s third term. Besides Soros, only a few other Liberal heavyweights pull Obama’s strings. And Obama pulls OBiden’s. Joe is Obama’s lapdog. Comrade Kamala is his attack dog.

In the midst of his calls for “unity” in America during his inauguration, OBiden encouraged Congress to “Do their Duty” and impeach Trump. Persecuting your predecessor on trumped-up charges is not exactly a prescription for unity when more than half the nation (including many Democrats) believe the impeachment is motivated by revenge. He also threw down the gauntlet against the 75 million people who voted for President Trump. He said he was “going to war” against them. He doesn’t say exactly how he plans to crush us and our ideas, but we’ve seen some pretty chilling previews.

Elderly Trump supporters have had their life insurance policies cancelled. Mike Lindell (the “My Pillow guy”) has seen major retailors cancel his products because he supported the President. Koh’s; HEB Stores; Wayfair; Canada’s Shopping Channel; and Bed, Bath & Beyond have all dropped Mike’s products. A question for you: If these stores don’t like our views, they don’t like us. Do you think they want our business? I think we should all buy lots of My Pillow products – directly from the company. Alexandria Cortez (AOC) has suggested compiling an “enemies list” so that Big Tech can more easily identify Trump supporter and shut down their accounts.

And what about Fakebook, Twitty and Goggle (which owns the video platform YouCensor)? They have not just permanently banned President Trump. They have censored or banned thousands of accounts of Christians, Conservatives and Patriots. Meanwhile they allow vile death threats from Muslims, posts from our gravest enemy (the Communist Chinese Party) and even child porn. All these have been reported to the tech companies, whose response is always, “We’ll investigate that.” What is there to investigate when a child is posed in sexual situations. That’s what you ban – and you do so immediately. You don’t censor people because they have different political views than the Liberal tech companies.

OBiden has joined the ranks of censors. One article I read while researching this piece contained this link to an Executive Order by President Trump concerning censorship by social media companies: https://www.whitehouse.gov/presidential-actions/executive-order-preventing-online-censorship/

Click the link. You will find “Page Not Found.” Within a few days of his inauguration, OBiden removed this Executive Order by the President. Also missing in action are all of President Trump’s Executive Orders. I’m surprised that OBiden didn’t remove him from the list of all the presidents who have served from George Washington on. I’m sure he would remove President Trump’s photo and biography if he thought he could get away with it. He has had to content himself with deleting everything else concerning the nation’s most popular president – particularly his major victories in the areas of foreign policy, trade and military affairs.

The point of this article is that this is just the beginning. They’ll start with censorship. Next they will close your business or force you from your job. Any pastor who has supported the President will be persecuted. They will continue to use the FBI and other intelligence services to spy on Americans – only now the emphasis will be on anyone who disagrees with the White House instead of going after real domestic terrorists.

Expect to see more and more heavily armed troops on display in every large city. Their purpose will not be to protect anyone; we never needed 26,000 troops in the streets of DC under Trump. This Martial Law will be for one purpose: intimidation of citizens. Eventually you will see these same troops rounding up Americans who dare to disagree with the government. Top Democrats have already talked about “re-programming Trump supporters.” Is a concentration camp in your future?

You will see more and more people arrested and imprisoned for “hate crimes.” A “hate Crime” if when someone is punished much more heavily because the prosecutor thinks he knows what the accused was thinking when he committed the crime. Imagine the enormity of this; you could be jailed not for what you thought, but for what someone else thought you thought.

How can they pull off this nifty way of getting dissenters off the streets and into prisons where they can’t protest against government injustice? Unfortunately, it is very easy. Let’s say a normal person gets in a fight with a transgender pervert. All the perv has to say to the cops is that he insulted my “sexual orientation,” and the straight guy is automatically guilty of a hate crime. It won’t even matter if the pervert started the fight.

What if a white person gets into an altercation with and Arab or a black person? They won’t even have to lie about a racial slur having been made. The white person is always guilty – not just for whatever crime is alleged, but with a “hate crime” enhancement that could keep him in prison for an extra 10 to 15 years.

OBiden and the people who pull his strings are going to use all the considerable force of the government in their “war” against anyone who dares to challenge them. We will see troops with automatic weapons on our streets when there is no real threat. Secret police will continue to try to entrap Trump supporters as they did even before he became President. They will continue to lie to the judges in secret courts (as the Director of the FBI, James Comey is proven to have done) to obtain illegal orders to listen in on your phone calls, and capture all your emails and texts.

So, what’s a patriot to do? Some are already going off the grid. They’re disconnecting their phones and Internet service, and plan to lay low until OBiden leaves office. Overkill? Perhaps. But if the FBI can falsely imprison a patriot like General Michael Flynn, they can do it to any of us. They couldn’t prove any crime, but they accused him of lying to the FBI because his memory was faulty on an unimportant detail concerning a phone call. The FBI agents who interviewed him said that he did not lie intentionally, but they charged him, anyway. He would have been found not guilty, but they threated to drag his family into court. So he pled guilty.

The alternative is to stand up for what you know is right. I do radio interviews twice a week on two conservative Christian radio stations. The hosts and I joke about being arrested by the “thought police,” but we’re really not joking – and it is far from being funny.

Friends, Obama’s third term, with OBiden as his puppet, will be remembered as the time when America lost its freedom if we don’t stand up to evil. Pray for the safety of our nation; pray for truth to prevail; and pray that God will guide you as to when to speak up and what you should say. Expect persecution, but don’t be deterred by it. If you want to have a country when OBiden is gone, you will have to be part of the faithful, non-violent, resistance.

Don’t let yourself be in the position where your children or grandchildren come to you and say, “Tell me the story again about how America used to be free.”

Thousands of National Guard Troops Could Remain in DC Into March