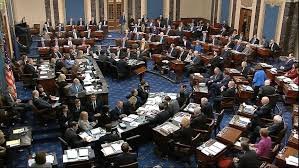 But will either of them ever be impeached for their actions? No. Because impeachment is not a matter of law or justice. It is strictly political. It is the most blatant use of raw political power possible. If you have any doubt about that statement, consider this: If the Republicans were in power in the Senate, no impeachment would take place, except for constitutionally impeachable offenses, which include treason, bribery, or other high crimes and misdemeanors. Likewise, if Republicans were in power in the Senate, President Trump could not be convicted in a Senate trial, even if a Democrat House impeached him.

The bottom line is that impeachment, particularly as it has been employed by Pelosi, is not about justice. It is a purely political tool used by the party in power to gain political advantage – removing a political opponent, shaming a political enemy (as they tried to do in the first sham impeachment), or trying to prevent a strong opponent from running against you (as is the case with sham impeachment #2).

Article I, Section 2 of the Constitution states that the House of Representatives “…shall have the sole power of impeachment.” Impeachment is the political equivalent of a Grand Jury indictment. It is not a pronouncement of guilt. It is an accusation made, in many instances, without any real proof or evidence being offered.

Article I, Section 3 states that “The Senate shall have the sole power to try all impeachments.”

Our Founding Fathers were very wise. They knew that impeachment would be a political, rather than a legal or judicial, exercise. So they made it extremely difficult. They wrote that “No person shall be convicted without the concurrence of two-thirds of the members present.”

Why is the pending impeachment trial of President Trump unconstitutional? Article I, Section 3 makes this clear: “Judgment in cases of impeachment shall not extend further than to removal from office...” Except in the minds of vengeful partisans, in what universe can a private citizen like President Trump be removed from office if he is no longer in office?

The second part of the quotation above provides the answer. The quote above continues: “…and disqualification to enjoy any office of honor, trust, or profit under the United States.”

The Democrat leaders know very well that their kangaroo court cannot fullfill the constitutional purpose of removing President Trump from an office he no longer holds. But they hope that the people will think, “It’s not a big deal if President Trump is convicted since he’s already out of office.” That is the shiny object they want us to focus on. But the dark reality that they want us to miss is that conviction would prevent him from running for office in 2024.

The Democrats know these things: That the new Socialist government is going to fail badly. That Biden is a weak man who will not run in 2024. That Kamala Harris is so radical that only 2% of Democrats voted for her in the primaries. And they know that patriotic Americans will vote them out of office if there is a strong Conservative, patriotic leader running against them.

So, they are engaged in this shameful persecution of a man who has done so much for this nation to ensure that he cannot run in 2024.

Those pushing for an impeachment trial of a president after he has left office don’t seem to understand the dangerous, far-reaching consequences of setting such an unconstitutional precedent.

It is unlikely that a trial will be held, because in a Senate vote on whether to proceed with an illegal trial, only five cowardly Republican Senators voted with the Democrats. By the way, if you want to contact them and respectfully share your thoughts and strong opinions, go to Senate.gov, click the SENATORS tab, then the CONTACT tab. Their names and states are:

I’m sure you have heard the expression RINO in reference to Republicans like these. It stands for Republicans In Name Only. A member of Congress doesn’t get that title for occasionally voting against the interests of Christian Conservatives who expect Republicans to vote for the values listed in the Party platform. You are a RINO if you consistently vote with the Democrats. All five of these are certified RINOs. If you live in their states, contact them and tell them you expect them to vote NO on impeachment if it actually goes to a trial.

By the way, the Senate Minority Leader, Mitch McConnell, is another turncoat. However he votes, he cannot change the fact that he publicly stated that he was not sure how he would in the potential Senate Trial. That’s enough to get him banned from Republican Party leadership forever. Worse than his statement is the fact that many Republicans, especially the newer Senators, take their cues from him. Saying he was not sure whether he would vote to convict President Trump was his way of saying that Republican Senators could feel free to vote for or against impeachment.

It would take 17 Republicans crossing over to the Dark Side to convict the president. Since the procedural vote showed that they only have five, my guess is they will save themselves the embarrassment of having the trial and seeing President Trump declared innocent.

But let’s say they are able to bribe or threaten enough Republicans to convict. After all, they have all the fearsome power of the federal government at their hands. They have used the FBI, secret courts, and congressional hearings to spy on and harass President Trump before and after his election. If they can do that to a sitting president, what’s to stop them from doing the same to a sitting Senator?

If they did this, and President Trump were to be convicted, consider the Pandora’s box that would be opened.

The Democrat candidate in 2024 will probably be Comrade "Kammie" Kamala. It is highly unlikely that, considering Biden’s physical and mental condition, he will last a year in office. Let’s say that Vice-President Pence is the Republican candidate. At that point, he would be a federal official who is no longer in office, just like President Trump. Kamala could dream up some imagined impeachable offense, and with the aid of corrupt intelligence officials, manufacture "evidence" against him, as the FBI did against President Trump. If they convicted Pence, they would have eliminated their competition.

An impeachment is not a real trial. It has the trappings of a trial: a judge, a jury, and advocates arguing both sides of the issue. There the similarities end.

First, the Constitution requires that the person presiding over the trial be the Chief Justice of the Supreme Court, currently John Roberts. Since he has refused to participate, and none of the Associate Justices – even the most liberal of them – will be taking his place, it is clear that the Supreme Court considers this impeachment proceeding to be illegal. On this point alone, any Senate trial cannot be legal or Constitutional.

To replace the Constitutionally-required Chief Justice, Chuck Schumer has chosen the President Pro Tempore of the Senate, Patrick Leahy, to preside. He has been a Senator for 46 years. He is a partisan Democrat who hates President Trump. In the eyes of Democrats, this will ensure a fair trial. Fair to them means getting the result they want – conviction.

Second, it is different from a real trial also in the sense that the so-called jurors are roughly half Democrats and half Republicans. Jurors are supposed to listen to the evidence and then deliberate. No deliberation will be necessary because it is pre-determined that all the Democrats and all the RINO’s will vote to convict. Likewise, all the real Republicans will vote to acquit – unless they or their families are coerced or receive death threats. Unfortunately, violence and death threats against Republicans have become more and more common recently. Please pray with me for a just and peaceful resolution of this shameful farce.