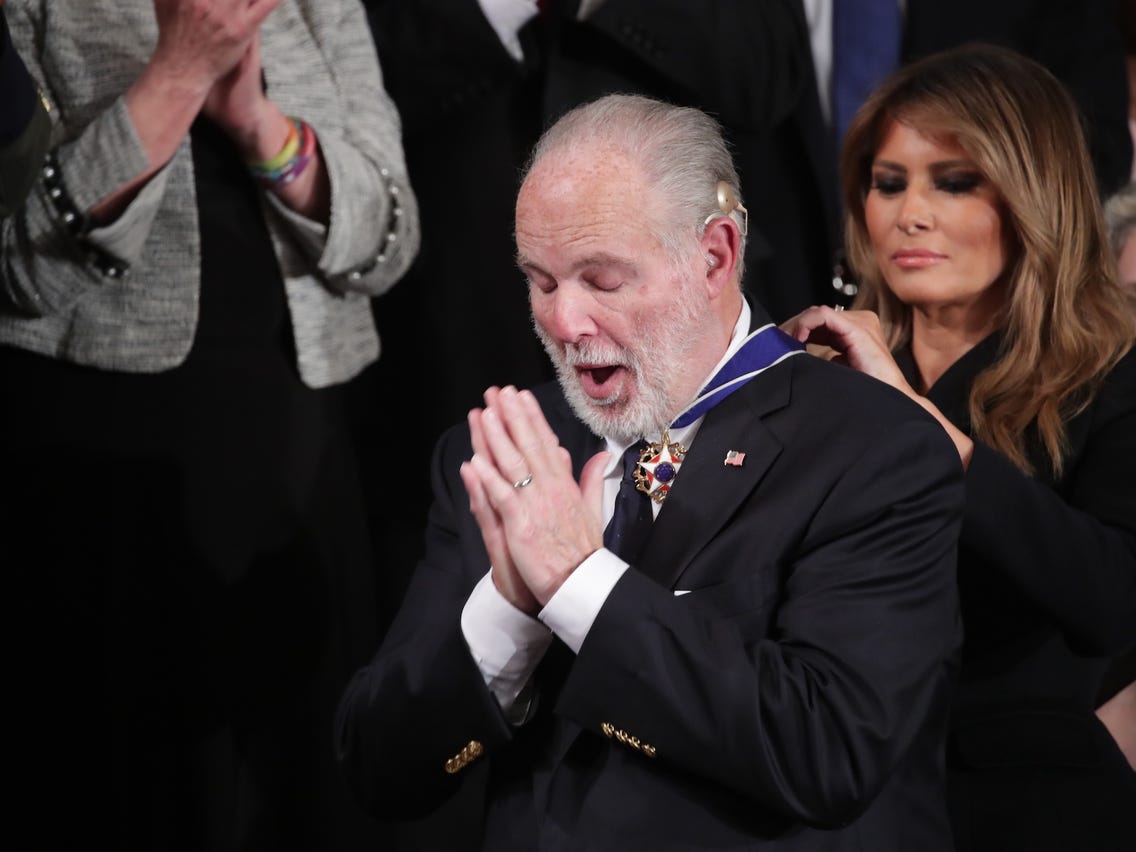 Two of the three greatest Conservative voices of our time have been silenced. Ronald Reagan went to be with the Lord on June 5, 2004. Rush Limbaugh graduated to Heaven this week on February 17. Fortunately, we still have President Trump with us.

For 30 wonderful years he taught us, entertained us with his infectious wit, and held the feet of Republicans and Conservative to the fire when they strayed too close to the dark side of Liberalism.

For over a decade, starting in 1990, "Rush Rooms" sprang up in thousands of restaurants all over the nation. They were a haven where millions of Rush's devoted listeners could listen to his three-hour daily live broadcasts with like-minded friends and strangers. Most dropped in for part of the show before going back to work.

All of them loved hearing Rush's latest and greatest commentary on matters of national significance and also his sometimes-quirky commentary from his "stack of stuff."

Many, I among them, believe that without the influence of Rush Limbaugh, President Trump and Vice-President Pence would not have been elected. Remember that in 2016 Candidate Trump was unknown to many Americans. Those that knew of him thought of him as a businessman and a TV show host – not as a potential President. But Rush strongly supported and defended Mr. Trump, and many who had trusted his wisdom and opinions for decades trusted Donald Trump - because Rush did.

Rush’s strong voice, big heart, and Conservative wisdom were followed by over 25 million Americans. Almost 10% of Americans listened to him daily. Amazingly, if we were a country, the Nation of Rush would be larger than 75% of the nations on earth. Rush wasn’t a personality; he was a phenomenon. There was never anyone like him in his ability to clearly speak truth to the hearts and minds of Christians and Conservatives. And I doubt there will ever again be anyone who can fill his shoes.

Some of my radio listeners and some readers of ConservativeTruth.com have jokingly referred to me as “Rush, Junior,” because we both stood for the same values and upheld the same principles. But I don’t have a fraction of his talent or his ability to command the attention of millions of patriotic Americans. If I were to be compared to Rush Limbaugh, I would be “Rush on Decaf.”

Like many radio hosts I learned a tremendous amount from Rush. Many of the best-known Conservative Radio and TV hosts have said this week that they probably wouldn’t be where they are today were it not for Rush. You’ve heard the saying, “Standing on the shoulders of giants.” I feel that I have been privileged to stand on the shoulders of this gentle giant, as many others have.

But I didn’t just learn from Rush in the areas of Conservative thought and wisdom. I studied and have tried to emulate his ability to take apart complicated or difficult concepts and express them in a way that every citizen could understand – and use in their conversations with Liberals. When people thank me for explaining the issues of the day in an unpretentious way, I always thank Rush Limbaugh.

Another of his great skills was making Conservatism fun! Most of us have had the experience of attending churches where the expressions of the members make them look as if they had just bitten into a bitter lemon. Like them, many Conservatives have the right ideas, but they are so grim and serious that no one would want to be like them.

Rush could find the joy in the most difficult circumstances. He was not a joke-teller, but he was very funny. He incorporated his wit and humor into his teaching. People learn better when their teacher makes learning fun. Many people considered Rush to be a showman, but in truth, he was primarily an educator who knew when to be serious, and when to throw in a zinger to lighten the mood.

I live not far from Rush’s home and studio, but I never had the privilege of meeting him. However, I know many people who knew him well. It may surprise you to know that – contrary to his radio persona – he was a very shy man. When he was on the air, he could seem egotistical. He said that he had “Talent on loan from God.” But that was all for show.

In person he was withdrawn and was often in awe of the great people who wanted to meet him. He came alive in his studio – sometimes it seemed that sparks would fly from him when he was on the air. But the rest of the time he was a quiet and generous man. Like President Trump, he helped people in need financially, or by using his influence. He always did so quietly, not wanting credit for his generosity.

Some have wondered whether Rush was a born-again Christian. My impression is that for most of his life he was a good man who didn’t publicly profess a relationship with Jesus. But friends who knew him well tell me that in the last few years he asked the Lord to be his Lord and take charge of his life. Since then, he hasn’t been shy about sharing his testimony. I’m glad about that, because I’d like to spend a few thousand years in Heaven having long talks with this fascinating man.

Rush Limbaugh was the original deplorable. Liberals, Democrats and Socialists hated him passionately because of his great influence for good. He was a huge patriot who loved America and believed she was exceptional among all nations. That drove the Globalist Liberals crazy.

He had tremendous influence, but he never bragged about it, so allow me to. Do you know that cars in Europe don’t have AM radios? When Rush started to become famous AM Radio was on its way out. But Rush gave it new life. He transformed AM radio, gave it new life, and expanded it into a force to be reckoned with. Rush is why American cars still have AM radios installed in them. Many years ago, I advertised on his show in just the Florida market. I couldn’t afford to be on in all the markets nationally. His show was heard by so many that I paid $12,000 for a 30-second ad.

He also transformed the Republican Party. Any Republican who strayed into Liberalville could expect to hear from Rush. He probably invented the term RINO (Republican In Name Only) because he had no respect for politicians who got elected as Republicans, and then betrayed their constituents by voting with the Democrats.

Anyone who still thinks that Rush in real life was the same as the radio Rush – loud, egotistical, and bombastic – only needs to look at the video when President Trump awarded him the Presidential Medal of Freedom. This is the highest honor our nation can give to a civilian.

You can see the shock on his face, and you can almost hear him thinking, “I don’t deserve this.” The tears running down his cheeks as the First Lady placed the medal around his neck were real. This humble man couldn’t believe he was being honored in this way.

ConservativeTruth.com doesn’t have a Webinar platform. So tonight at 8PM EASTERN TIME, Christian Financial Concepts will depart from its usual focus on financial matters and allow Conservative Truth to turn its regular Monday night Webinar into a "Rush Room."

Call 561-753-5998 for an invitation to attend. Or go to www.ChristianFinancialConcepts.org to register.

If you are one of the few who never heard Rush, join us to learn about one of the greatest patriots and influencers our nation has ever been blessed with. If you followed Rush, please bring your stories to share with us. Tell us how Rush influenced your life; the funniest story you heard from him; or the most powerful lesson you heard him share in his unique style. Let's make this a time of joy as we help send this kind and gentle man off with our thanks - and our prayers for his family.


(No politics tonight, please. Just joy and appreciation for a great man we will miss greatly.)