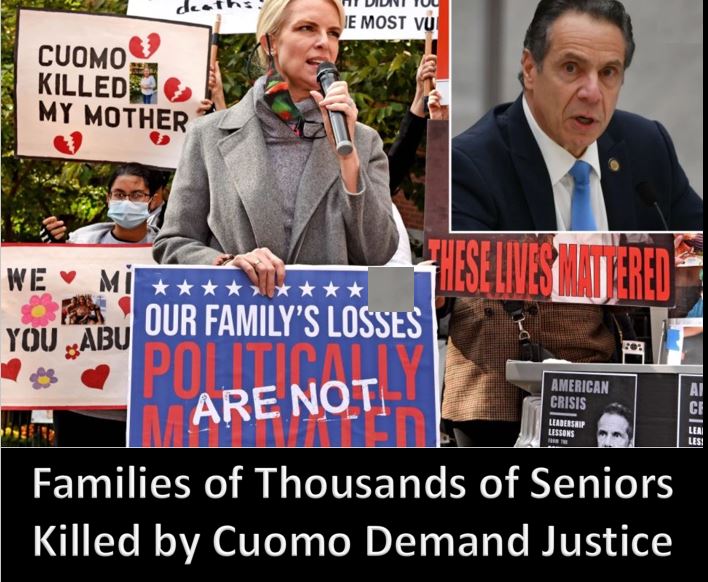 First, it was 4,000 China Virus deaths in New York’s nursing homes. Then it was 6,000. Now that Governor Cuomo’s office has finally admitted to lying about the deaths, the number has grown to well over 15,000.

In my July 2020 article “New York vs Florida: A Liberal Liar vs a Conservative Who Cares, ”I referred to New York Governor Andrew Cuomo as the Village Idiot of New York. Perhaps I was too kind. He wasn’t just stupid in the way he handled the pandemic; he was evil. He forced nursing homes to take Virus-infected patients into their facilities, many of which had no China Virus patients. And he refused to allow them to test these patients to see if they had the Virus.

The results were predictable – except, perhaps to the Village Idiot with an ego so massive that he believed that whatever he decided must be right. The Virus blew through those facilities like a wildfire in a drought. Thousands of seniors died unnecessarily. The results were so horrendous – refrigerator trucks filled with dead senior citizens – that the Democrat New York Assembly has voted to remove Cuomo’s emergency powers. Unfortunately, they were too cowardly to impeach him.

Meanwhile, instead of dealing with the disaster, Cuomo was giving daily two-hour press conferences, complete with pretty slides and charts, and guests who shared his views. He acted like he was the head of the national pandemic task force doing far more press conferences than the real task force did and issuing pronouncements from the CDC and WHO as if they were his own.

He was actually auditioning to be Biden’s Vice-President, but he was too foolish to know that he didn’t have a chance. Biden’s handlers were searching the nation for a black female, preferably a lesbian or a transgender, and hopefully an atheist or a practicing witch. They needed someone who checked off all the Liberal boxes, and the hapless Cuomo was too much like Biden in his ignorance and lack of critical thi 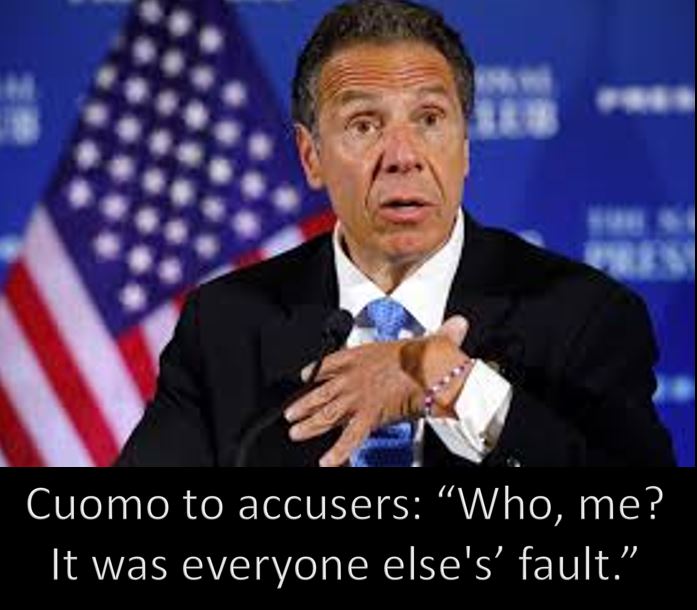 nking skills to be paired with him.

They chose Comrade Kamala even though she had zero support among Democrats (she received less than 1% of the vote in the primaries and had to withdraw in disgrace) because she was the most radical US Senator, and they wanted an extreme Marxist in the White House.

As I have said before, they will put Biden out to pasture in the next few months, and the U.S. will have not just a Socialist, but a card-carrying Communist in the White House. If you have any doubts as to who she is, research not just what she says – she can lie with the best of them – but what she has done. When you see who our next “President” really is, it will keep you up at night.

Since he had so badly mishandled the state’s finances, Cuomo loudly demanded that the federal government pay for all the costs of managing the China Virus. He harassed and refused help from Franklin Graham’s Samaritan Ministries, which built a field hospital in Central Park at no cost to the state, because it was Christian charity. But he demanded that President Trump send one of our nation’s two hospital ships, the USS Comfort, to New York Harbor.

With New York’s hospitals packed, he allowed a few dozen patients to be transferred to the 1,000-bed ship with a staff of 1,200. He sent the rest to the nursing homes, which were not equipped to treat them. Not only did they die there while help was in the harbor, but they infected thousands of healthy residents. All due to Cuomo’s ignorance and gargantuan ego. The ship left after three weeks.

Cuomo also bullied the federal government in his press conferences to build not one, but seven fully staffed and equipped field hospitals at a cost of well over $300 Million. They had a collective capacity of over 2,200 beds. Three of them never treated a single patient. Four had a handful each. It cost millions more to dismantle the unneeded field hospitals. 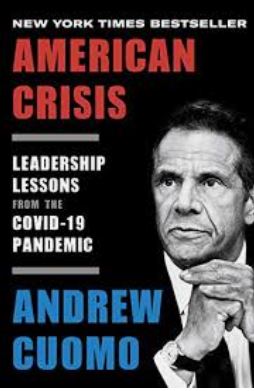 After horribly mismanaging the pandemic, killing thousands with his uninformed and illegal orders, and hiding the statistics on at least another ten thousand deaths, he did the natural thing. He toured the nation, lecturing other states on how they should handle the situation. Then he wrote a book on the subject, just to make sure everyone remembered that he was the most wonderful, intelligent, insightful, and courageous leader the United States has ever been blessed with.

Meanwhile, with both the state and federal governments demanding statistics on what really happened in New York, Cuomo stonewalled them. He instructed his staff to “massage” the numbers to show him in the best possible light. He transferred patients that on the verge of death from the Virus due to his incompetence, to be quickly transferred to hospitals so that he could report that they hadn’t died in the nursing homes.
Unfortunately for him, one of his closest aides disclosed the reason for the lies and stonewalling on a Zoom conference with Democrats. Cuomo and she, along with others in his administration, were afraid that they would be investigated by the feds if the truth got out. Fortunately, an honest Democrat who was sick of all the corruption taped and leaked the conference call.

Cuomo finally admitted that the numbers had been altered, but of course he blamed the crime on others in his administration. Fortunately for the thousands of families who have been demanding answers as to why obviously infected patients were ordered by Cuomo to be transferred to homes where there were no ill patients, it looks like there will be a criminal investigation. Just a few days ago he made the incredibly insensitive remark, “What difference does it make whether they died in a nursing home or a hospital?”

The Liberal news media has been concentrating on all the emerging information that Cuomo is a serial sexual harasser. They had long known that he was a violent bully who intimidated his staff and other Democrats by threatening to “destroy” them if they opposed any of his edicts. It was the most open “secret” in New York. But they have run with the sex scandal because it distracts from the fact that they have protected Cuomo in regard to his incompetent and probably criminal actions regarding the China Virus. The media looks out for Liberal politicians, but they protect themselves first.

I’ll just touch on this briefly, because as disgusting as sexual harassment is, sending senior citizens to their deaths is the more important story, and the one that Cuomo and the media want to hide. So far no one has accused Cuomo of raping them, and a powerful, rich politician can survive sexual harassment charges. But it is doubtful he will survive a federal criminal probe.

As of this writing, five women, four of whom worked directly for Cuomo, have come forward. There will likely be dozens more, because as the first few women reveal the truth, it gives others the courage to do the same.

So far there have been sworn statements of unwanted kissing on the lips and touching of various parts of the female staffers’ bodies. One was summoned to his hotel room, where she was embraced. She shoved Cuomo away, but he continued to try to hold her until she escaped the room. He suggested to another on his official jet that she play strip poker with him. He asked another, a third of his age, how she felt about having sex with an older man. I don’t feel comfortable relating the rest of the allegations here.

This is presenting a massive quandary for the Democrats. They have sanctimoniously preached that everyone must believe all women who accuse men of sexual harassment, no matter how ridiculous the claim. If anyone fails to automatically believe every woman, they will burn in hell forever.

Unfortunately for him, Andrew Cuomo was very vocal about the bogus attempt to smear Justice Kavanaugh during his confirmation hearings. A woman named Christine Ford claimed that decades ago when he was in high school the Justice had engaged in sexual improprieties. There was no evidence, and no contemporaneous witnesses. Yet a group of Democrats invaded the Capitol, broke into the hearing room, shouted obscenities, and insisted on “justice” for this woman.

Cuomo supported this “me, too” movement, insisting that Kavanaugh be hung in the public square. He also demanded that the Justice be required to take a lie-detector test.

Now Cuomo has been accused by at least five women who have evidence (including photographs) and witnesses – including members of Cuomo’s own staff who took reports on the assaults. I wonder if Cuomo still feels the same way about taking a lie detector test in cases like this.

He has even sexually harassed male members of his staff. I won’t use his words, but he told these men that they were (a vulgar word for a woman’s genitals). He also accused them of not having certain parts of their male genitals. Isn’t it nice to know that we have a “gentleman” like this leading one of the most important states in the union?

Of course, none of this is Cuomo’s fault. He blames President Trump for every bad decision Cuomo himself made during the worst of the pandemic. And he threw his own father, also a governor of New York, under the bus regarding his sexual misconduct. He said that his Italian family was used to hugging and kissing and touching to let people know they were accepted, and he was just following his father's lead.

It was once said of Bill Clinton that it would be easier to count the women he had slept with in Little Rock when he was the governor of Arkansas, than to count the ones he had not slept with. He even had State Troopers bringing young women staffers to his hotel room for evening “meetings.”

Perhaps Clinton has met his match in Andrew Cuomo in the areas of corruption, incompetence, and abuse of women using the power of his office.