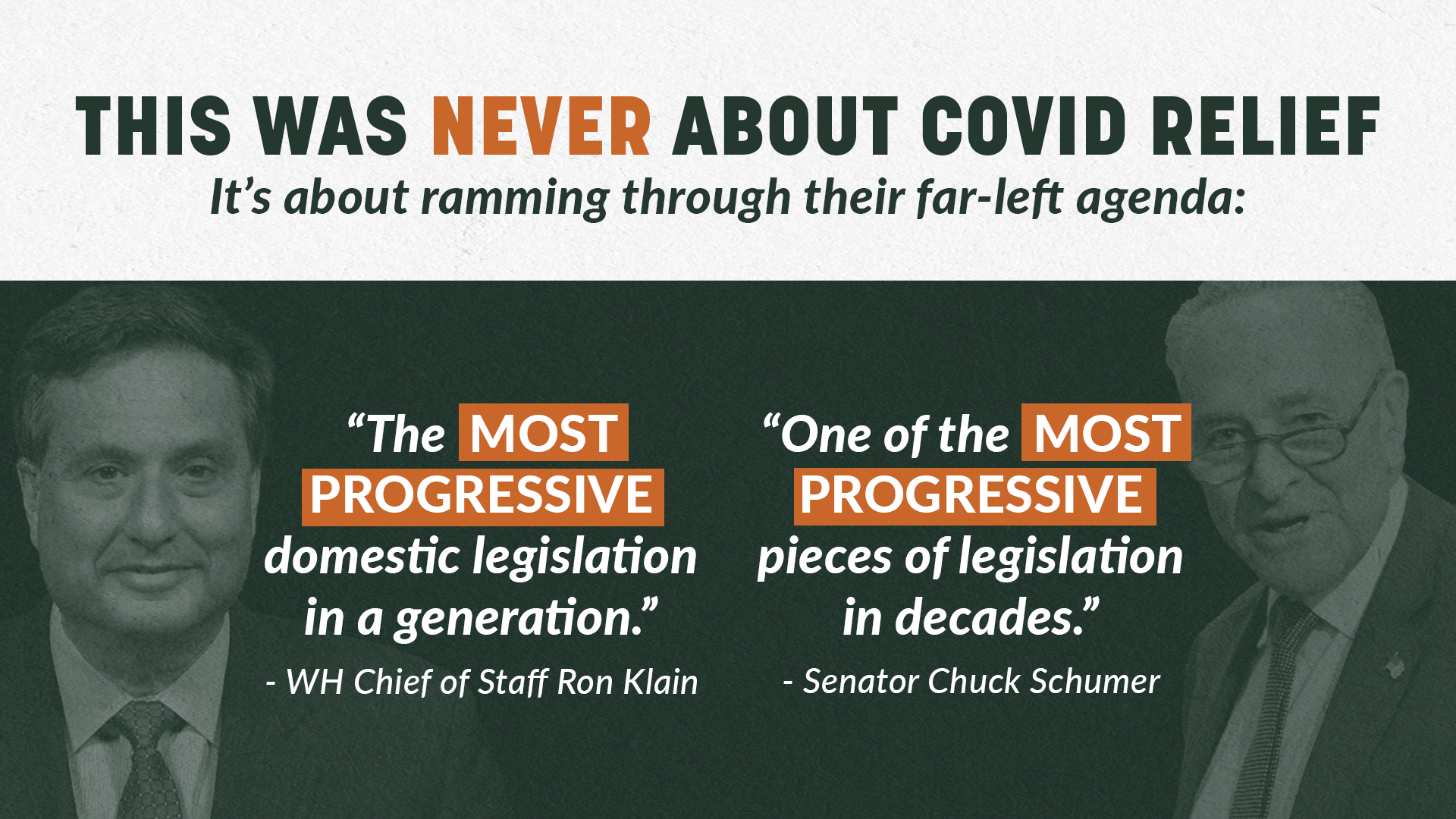 Over $1 Trillion of the China Virus relief money appropriated last year has still not been used. But the Democrats are beating their chests in triumph over passing another $2 Trillion in spending. (Yes, Joe, we figured it out. $1.9 Trillion is really $2 Trillion.) This will push the National Debt to $30 Trillion. Every American with a brain was outraged when the Obama-Biden administration doubled the National Debt from $10 Trillion to $20 Trillion in just eight years. To put that into perspective, they spent more than the 43 administrations before them had spent in 232 years.

With this bill, the $4 Trillion in new taxes they promised during the campaign, and the Harris-Biden administration’s repeal of the Trump tax cuts, we’re going to see another $10 Trillion added to the Debt, breaking the Obama-Biden record. If you doubt this, listen to Biden’s own words: “I'm going to get rid of the bulk of Trump's $2 trillion tax cuts, and a lot of you may not like that.”

Really, Joe? I thought Americans loved paying more taxes. Based on the tax policies announced by the Harris-Biden White House, the average American family will pay $2,000 more in federal taxes. And that’s just in the first year. Before they’re done, the top personal tax rate will have to be at least 55% to make a dent in the $40 Trillion National Debt they will have racked up in just one term. The Chairman of the Joint Chiefs of Staff has stated that the gravest national security threat to America is the National Debt.

The Wall Street Journal editorial board estimates that of the entire nearly $2 trillion proposed, only about $825 billion, less than half, is related to the pandemic. The majority of funds are directed to “expansions of progressive programs, pork, and unrelated policy changes.”

An audit of the bill conducted by Forbes found numerous instances of earmarked spending unrelated to coronavirus aid – in particular millions that benefited the two people most responsible for slamming the bill through their respective chambers.

Fortunately, these two provisions were removed from the bill after the Senate parliamentarian ruled they were not acceptable under the budget reconciliation rules Senate Democrats will use to slip the bill through without using normal procedures. Another Democrat favorite, hiking the federal minimum wage to $15 (which would have cost 1.4 million jobs, according to the non-partisan Congressional Budget Office), was also axed.

But billions of dollars in pork made it through. After removing these items unrelated to the pandemic, the cost of the bill didn’t change. They just replaced this pork with other pork.

I believe that the United States should pass a Constitutional Amendment that no law passed by Congress can be longer than the Constitution. Any honest lawyer will tell you that the longer the contract, the more opportunities will exist to sneak in loopholes. In the case of this bill, what could be said in a few dozen pages if it were honestly about China Virus relief, ended up being 591 pages. Using the Wall Street Journal’s calculations, that means that 325 pages contain wasteful spending designed to get Democrats re-elected. Here are a few of the most egregious provisions…

The bill includes $350 billion in funding for state and local governments– all Democrat - they say are facing budget shortfalls because of decreased revenue during the pandemic. Economists say this spending does not qualify for federal bailouts since these governments were in financial trouble before the China Virus. They say the Virus should not be used as an excuse to bail out irresponsible local politicians in Democrat cities, counties, and states. These bailouts are in addition to millions already earmarked for them in previous relief bills.

$19.1 billion for housing assistance, also in addition to similar spending in previous bills. Such assistance could well be needed, but it should be done on its own merits in its own bill – not disguised as China Virus relief.

$473 billion in cash payments to individuals, $1,400 for every person in families who earn less than $75,000 a year. When the first checks were sent out, I objected to them, and I object to this. These checks should be sent to families that really need them. We shouldn’t be sending $5,600 to a family of four making $75,000. Instead, we could send larger checks to families that really need the help – families whose businesses or jobs were crushed by the overzealous lockdowns in Democrat states.

Arizona Republican Congressman Paul Gosar feels the same as I do. He offered an amendment to take out all non-COVID-related spending in the bill and convert it into sending $10,000 checks to these people most affected by COVID instead of $1400. Every Democrat voted against it. After all, it was their pork he was trying to take away.

A new fully refundable child tax credit for 2021 would give families that qualify $3,000 per child ages 6 to 17 and $3,600 for children under 6 years old. “Fully refundable” means that these families will receive a tax “refund” in these amounts – even though most will not pay any taxes whatsoever. Only a politician could call stealth welfare a “refund” when no funds had been paid to refund. This is simply another way to get around the welfare laws, and gain new Democrat voters.

Here are some other examples of the cynical use of Nancy Pelosi’s and Chuck Schumer’s power. Remember that this bill did not go through the normal processes by which bills are created under the Constitution. Pelosi, Schumer, and a few of their top members wrote the bill, then ordered their members to vote for it – even though they had no opportunity to read what they were voting on. Republicans had no input into the writing of the bill.
The state of New York is currently facing a $63 billion budget deficit as a result of Governor Cuomo’s statewide shutdown of the economy and mismanagement of state funds. So, his best buddy, Sleepy Joe (whom Cuomo supported vigorously during the presidential campaign), has earmarked $50 Billion. Coincidentally, that’s almost enough to cover Cuomo’s deficit. And the timing couldn’t be better, since the money comes as Cuomo is under increasing pressure from his own party to resign over his multiple sex scandals and his brutal rulings that caused the deaths of 15,000 senior citizens in nursing homes.

For some reason, bailouts like this are common in the bill for Democrat states who have wasted money and generated huge debts, but none have gone to Republican states which stuck to their budgets but were hit hard by the China Virus.

One last particularly alarming provision in the bill is $112 Million for Bill Gates, Jeff Bezos, and the other multi-gazillionaires who donate billions to the Democrats. It’s to build a special subway for the tech companies (as if they couldn’t afford to build it themselves). This is only part of the $4.7 Billion original cost, which has now been increased to $6.9 Billion – all paid for by state and federal taxpayers. It’s really small potatoes when compared to some of the other pork. What frightens me is the devious way they included it.

The House Transit Committee put the spending in their section of the bill, where the language states that “all projects under section 3005(b) of Public Law 114-94 that received allocations for fiscal year 2019 and 2020” except “projects open for revenue service.” The problem is that there is only one project that currently falls into that category: the Silicon Valley subway.

If you read the entire bill you will find no mention of this project. So even if our representatives read this bill (which they didn’t – they weren’t given enough time), the underhanded way Pelosi’s slimy sycophants sneaked this into the bill, it would not be detected by any except the most astute detectors of corruption. And this is just one of dozens of similar unlawful thefts sneaked in using language that disguises their real purpose.

Friends, spending like this will push us even more quickly to the edge of the cliff. Our National Debt is already greater than that of any nation that ever existed. The US lost its AAA credit rating from Standard and Poor’s in 2011, and other nations are staying away from Treasury auctions in droves. The only organization buying treasuries in any significant amounts is the Federal Reserve System in a feeble attempt to make it appear that there is still demand for US Debt.

That’s like you taking $100 out of your right pocket, putting it in your left pocket, and saying you “loaned yourself” $100. It’s nothing but smoke and mirrors.

Why is this important? Because money must be backed by something. Before 1933 our money was backed by Gold. Then FDR confiscated the Gold from private citizens, which was 40% of their wealth. They complied because he threatened them with 10 years in prison, or today’s equivalent of a $1 Million fine – or both.

Since then, our “money” has been backed only by debt. The US Treasury has to sell Treasury bonds, notes, or bills in the amount of those trillions of dollars you see rolling off the printing presses on TV. A debt collapse is inevitable. It will happen just as it has in every bankrupt nation in modern times. (Yes, the U.S. is bankrupt. The definition of bankruptcy, whether or not it is declared, is owing more than you own. The US definitely meets this definition, especially when all our off-the-books debt – euphemistically called “unfunded liabilities” is included.)

Debt collapses trigger currency collapses. The average lifespan of a currency like ours – one backed by “nothing,” according to the US Treasury website – is just 27 years. We have beaten the odds because we are currently the World Reserve Currency. But history shows that no nation retains that title for long, and we are in danger of losing it for numerous reasons. In a currency collapse, only those with real money – Gold and Silver – will be able to buy and sell. The rest will have to resort to barter.

Those of you who voted for the Harris-Biden ticket (including all the dead folks) will have only yourselves to blame. Those who voted for President Trump are our nation’s last, best hope. If we pray and work hard we can flip both the House and the Senate in the mid-terms. The Democrats have no majority in the Senate, and a razor-thin one in the House. We can throw the bums out. And then Supreme Ruler Kamala will only have executive orders – which Congress can overturn. There is light at the end of the tunnel.

NOTE: Before you write to inform me that I am mistaken when I refer to the current administration as Harris-Biden, I am not. The Democrats have had an understanding from the beginning that Biden would just be an electable placeholder because Harris was unelectable. Both Harris and Biden slipped up during the campaign and revealed the truth on camera when they referred to the Harris-Biden White House. Make no mistake; Comrade Kamala is firmly in charge, and Biden is her VP. Within a few months, she will tell him that it’s time for him to resign for “health reasons” (Who could question that?). And he will say, “Yes, Mistress Kamala.” Obama-Biden, Harris-Biden. Poor Joe has always been destined to be second fiddle. More on who is really in charge (and who is pulling Harris’ strings) in a later article.

The 5 Worst Examples Of Pork Spending In The Latest Covid-19 Spending Bill https://conventionofstates.com/news/the-5-worst-examples-of-pork-spending-in-the-latest-covid-19-spending-bill