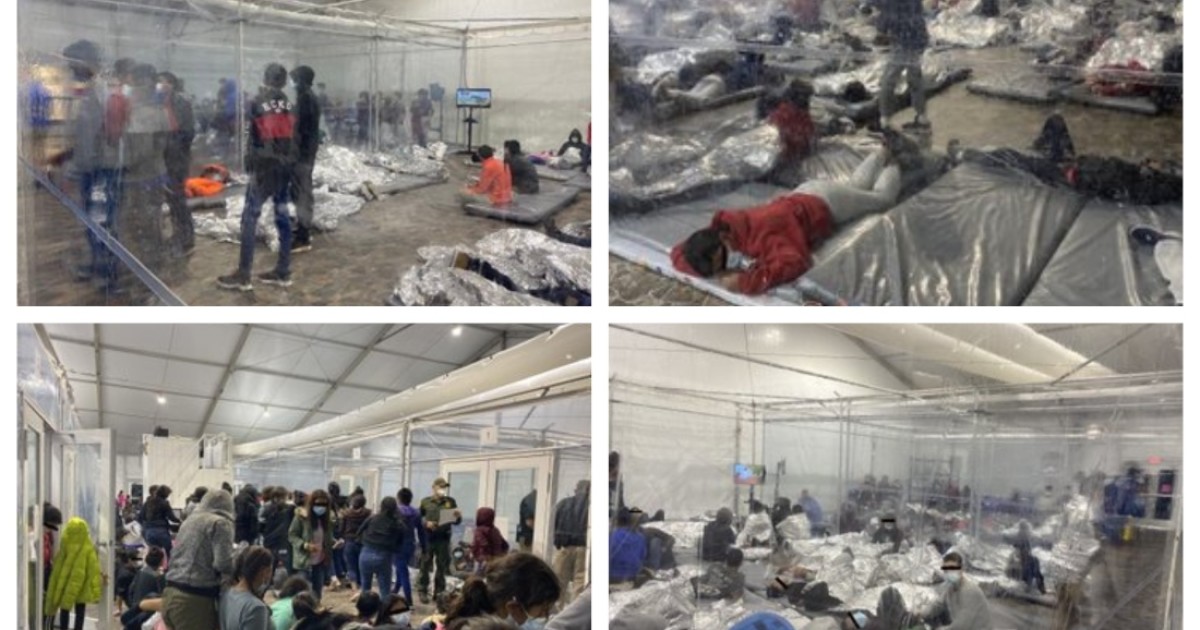 What is the Harris-Biden administration hiding on the border? Not as much as it was a week ago. Let me explain.

The photo accompanying this article was leaked by a Texas Congressman, Henry Cuellar. Surprisingly, Cuellar is a Democrat. Or perhaps it’s not such a surprise, since his district is on the border, and he lives in the district. Cuellar is just one of many Democrats who are unhappy with the administration tearing apart the effective system for dealing with immigration developed over four years by President Trump without having a plan to replace it. But he is the first to openly defy Biden by leaking the photos and then giving interviews on national TV. This is what he revealed…
In February over 100,000 illegals entered our nation – and February is considered a slow month. March through June are the months when the highest number of illegal crossings take place. If the current trend continues – and it will – well over a million illegal aliens will enter the U.S. and disappear into the shadows. They will overwhelm our welfare, medical, education, and legal systems. And many will vote in our elections, thanks to Democrats removing requirements that voters prove that they are citizens and legal to vote.

Long before his inauguration, Biden sent clear messages to citizens of Guatemala, Honduras, El Salvador, and Mexico that the border would be open under his administration. People from many other nations heard his message and have joined the caravans. Border Patrol agents have captured Arabs, Chinese, Africans, and even Europeans at our border. Why pay thousands of dollars and wait in line to enter legally, when you can pay a human trafficker as little as $1,200 and get in right away?

The perception of most Americans, pushed by Liberals who need illegals to become Democrat voters, is that “Human Trafficking” involves a kindly smuggler (referred to as a “Coyote”) who helps poor people seeking asylum from murderous governments find safety and tranquility in the Promised Land - Estados Unidos, the United States. This is a dangerous misconception.

So, what is “Human Trafficking?” According to our Department of Homeland Security, “Human trafficking involves the use of force, fraud, or coercion to obtain some type of labor or commercial sex act. Every year, millions of men, women, and children are trafficked worldwide – including right here in the United States. It can happen in any community and victims can be any age, race, gender, or nationality. Traffickers might use violence, manipulation, or false promises of well-paying jobs or romantic relationships to lure victims into trafficking situations.”

Human traffickers control our Southern border. U.S. and Mexican border officials have long realized this, just as prison wardens know that the various gangs control their prisons. No one gets across our border without paying a trafficker, who is part of one of the many violent cartels who also control the drug, sex, and gang activities on both sides of our border. By issuing an open invitation to illegals to violate our laws and enter our nation using the services of these cartels, Biden has become the U.S. Trafficker-in-Chief. He has also become the major source of funds for Mexican drug, forced labor, and sex cartels.

Biden perpetuates the propaganda that the majority of illegal border crossers are here to seek asylum. This is a demonstrable lie for two reasons. Only 5% of illegals who appear for hearings are found to have credible threats to their life or safety if they stay in their home nations. The real percentage is much lower since the vast majority – over 90% - never show up for their hearings. They are too busy performing forced labor or prostitution to pay off the balance of the money due to their trafficker. They discover after they arrive in the U.S. that the $1,200 fee they paid was just a down payment. The actual fee ranges from $5,000 to $8,000. If they don’t pay, they will be injured, murdered, or their child or wife may be kidnapped.

The traffickers have gotten more sophisticated. They now issue wristbands of different colors depending on the type of person being smuggled in. No one gets across the border without their permission. Some of the victims are simple laborers. Others are ear-marked for prostitution. MS 13 gang members, drug and gun runners, and wanted criminals are taken across separately. Border Patrol officials tell us that the coyotes arrange for large numbers of “regular” illegals to surge hundreds or thousands of people to one area of the border. This makes the Border Patrol officers respond to that area, leaving another area open for the really bad guys to cross while the officers are busy elsewhere.

So, what is the bottom line in all of this? A human trafficker is someone who assists people to get to a place where they can be used in prostitution or slave labor – or who aids and abets their criminal activity. Crazy Joe Biden is materially assisting the traffickers for his own political gain, by ordering the Border Patrol to release hundreds of thousands of illegal aliens – as many as 10% of whom are infected with the China Virus - into our population. That makes him a human trafficker.

He welcomed 100,000 illegals into our nation in just February – 300% more than last February, when President Trump was working so hard to keep them out. That puts us on track to have over a million illegals enter our nation in one year in violation of federal laws he has sworn to uphold.

In addition to the poor people who admit they come here just to get jobs, there are hundreds of thousands of other poor people who make fraudulent claims of asylum. Biden has ordered the Border Patrol to give them a court date to present their asylum claims – usually years down the road. 95% of them never show up to court. Instead, they get jobs illegally, which allows the human traffickers to exploit them, keeping most of their pitiful income to pay the traffickers for bringing them here. Others are forced into prostitution. They keep quiet because the traffickers tell them they will send them back home if they talk to the police. Others threaten the lives of their families back home.

Most of the illegals are simple people who just want to make a better living and live in a free society. We can all sympathize with that. But the math doesn’t work. The United States has about 5% of the population of the world. The most impoverished American is fabulously rich compared to over 50% of the world. We simply cannot take in everyone who wants to become here. We would become one giant refugee camp with decimated businesses, hospitals, and schools overwhelmed, and ultimately no one able to make any money to pay for all the care of the refugees. Except Biden. He still has over $1.5 Billion in bribes paid to his drug-addict son and con man brother by China to buy Biden’s influence.

But Biden’s human trafficking activities also allow the following types to enter our nation with impunity, since ICE is no longer allowed to deport them under Biden’s Executive order…
Biden is so ignorant that he wasn’t in office for two days before he started dismantling…
Poor addle-brained Biden may not even know what he has done. We have watched him forget where he was; forget whether he is a Senator or the pretend president; refer to Comrade Kamala as “President Harris” on several occasions (which is probably the truth); and forget what he was doing. Remember when he had a stack of a dozen executive orders to sign, and a hot microphone caught him mumbling, “I don’t even know what I am signing!” And of course, we have all seen him stumble in the middle of an incoherent , rambling statement, stop, and then stare out in the distance hoping someone will rescue him.

I don’t think he gets that when he allows our country to be overrun as it is, he is the main financier of the coyotes and the other traffickers. He doesn’t understand that the cartels run the border. President Trump had really hurt the cartels' business, but now they hold celebrations over the new-found wealth their new bestie in the White House has made possible.

But whether he understands what he is doing to destroy our nation with his partnerships with the cartels and human traffickers or not, he has certainly earned the title “Human Trafficker-in-Chief.”

The one good thing about all of this is that he seems to have forgotten his other title: Commander-in-Chief. This is the man who, while running for president, introduced himself several times by saying, “I’m Joe Biden, and I’m running for the U.S. Senate.” This is the man who, while giving a stump speech by a pool, wandered off into the deep recesses of whatever controls his mind, shared that when he was a lifeguard, little kids used to love to rub up and down his legs “because I had really hairy legs.” Horrified mothers were seen in the video (yes, this has been documented on camera) trying to cover their children’s ears.

The idea of this deeply troubled person with possibly age-related memory issues having the ability to launch nuclear missiles should keep American citizens up at night praying that he will forget the codes (as he seems to forget everything else). God save America from this man and his Marxist handler, President Harris.