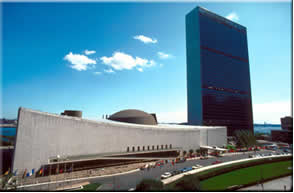 Acclaimed journalist Claudia Rosset says the United Nations has degenerated into an institution "mired in corruption, secrecy, venality and total lack of accountability." Lt. Col. Gordon Cucullu (Ret.) calls it "the most morally corrupt international organization in the world." And those are just the positive comments.

The UN is a worldwide organization. So it is only fitting that its corruption is world class. So committed is the United Nations to fraud, graft and generally reprehensible behavior that it has voted to do away with the two internal watchdogs that were designed to catch corrupt UN officials.

This week the Wall Street Journal reported that the United Nations membership voted to disband the anti-fraud office that uncovered $610 Million of fraud in UN contracts. The Office of Internal Oversight Services (OIOS), despite fierce opposition and almost total lack of cooperation from member nations, managed to expose this huge amount of fraud in just its first two years. Imagine the billions it would have exposed with more time.

Of course the membership did not do anything as crass as actually shutting down the OIOS. It just de-funded the organization. "Go ahead and be fraud crusaders all you want to," was the message. "You'll just have to do it without salaries, equipment, or professional services."

Last month the corrupt organization also shut down a US-backed drive to protect UN whistle blowers. It used the same tactic as it used with the OIOS - cutting off its funding. This contract fraud organization was called the Procurement Task Force. Its purpose was to investigate bid-rigging, bribery and other abuses in procurement contracts involving UN headquarters and peace-keeping missions.

An Internet search took less than one second to return 1,720,000 documents and articles when I used four key words: "United Nations corruption fraud." I didn't read all of them, but by opening just a few I found some fascinating quotes from OIOS. (For detailed information, see the numerous Internet LINKS at the end of this article.)

OIOS officials stated in a published report, "The task force identified multiple instances of fraud, corruption, waste and mismanagement at U.N. headquarters and peacekeeping missions, including ten significant instances of fraud and corruption with aggregate value in excess of $610 million."

A recent investigation in Congo revealed "widespread and inherent corruption" and an "extensive pattern of bribery" throughout the UN mission's purchasing department. The agency exposed a UN purchasing agent, Russian national, who received more than $1 Million in bribes before he was caught.

The OIOS has uncovered such illegal activities as UN officials charging the organization $10,000 each for $300 water pumps and approving full payment on contacts which had only been partially fulfilled.

And a Washington Post article about the OIOS related, "A U.N. task force has uncovered a pervasive pattern of corruption and mismanagement involving hundreds of millions of dollars in contracts for fuel, food, construction and other materials and services used by U.N. peacekeeping operations, which are in the midst of their largest expansion in 15 years."

Previous internal investigative initiatives within the UN had been inefficient money wasters. In some cases the corruption investigators themselves had been accused of corruption and accepting bribes to ignore wrongdoing. Even the detractors of the OIOS admit that this organization produced far more and better quality investigative results than its predecessors.

Small wonder, then, that corrupt member nations pulled the plug on them.

The UN is clearly unhappy with the task force it created. (It probably assumed that this body would be as lazy and inefficient as the ones that preceded it.) The OIOS report to the Assembly says, in part, "The task force's recommendations of recovery actions, supported by documentary evidence of fraud, corruption and misappropriation of funds resulting in losses and damages, have not been vigorously pursued." That's a diplomatic way of saying that task force recommendations to file criminal charges against corrupt United Nations officials and contractors and to attempt to recover profits gained by criminal actions have been virtually ignored by the Office of Legal Affairs.

The report also criticized the UN's lack of diligence in dealing with proven corrupt firms. It pointed out that more companies suspended for misconduct by one UN body often continue to contract with other U.N. funds and agencies. "In more than a handful of cases," the report said, "perpetrators of fraudulent and corrupt schemes have been able to simply reconstitute themselves under a separate corporate identity."

How long will the United States continue to support an organization that:

1.Â Closes its eyes to rampant bribery and theft by its own officials?
2.Â Allows a culture of "widespread and inherent corruption" to flourish?
3.Â Shuts down internal organizations that expose criminal activity?
4.Â Covered up bribes and kickbacks of over $10 Billion in the Oil-For-Food scandal?
5.Â Proceeds with a multi-Billion dollar renovation during a global financial crisis?
6.Â Is composed primarily of nations that hate the United States?
7.Â Is funded mainly by one of the 200 nations in the world - the United States?

Why should we foot the majority of the bill for an organization that squanders most of the money we give? We could do far more good throughout the world with a fraction of the money we pay the UN.

Why should we provide a platform for terrorist nations, communists, brutal dictators and human rights criminals to spew lies about us and our allies? If they want to start an organization for their kind, they can pay for it. They could call it the United Rogue Nations. (And we could start one that only admits nations that respect human and religious rights, and have representative.)

Finally, why should we allow this worse-than-worthless organization to squat on some of the most expensive real estate in the world (provided, of course, by generous old Uncle Sam) when it is commonly known that UN "diplomats":

1.Â Spy on our nation country, engaging not only in espionage that compromises our national security information, but also industrial espionage that harms our companies and our economy.
2.Â Regularly flaunt our laws because of diplomatic immunity. These "diplomats" have committed rape and murder on our citizens, and never been called to account.
3.Â Rage to the media about how evil and corrupt they think the United States is, while living in luxury at our expense.