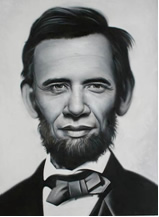 In the 1988 vice-presidential debate Lloyd Bensten said to Senator Dan Quayle, "You're no Jack Kennedy." Somebody needs to tell Barack Obama that he is not the second coming of Abraham Lincoln. In fact, I'll do it myself: "Obama, you're no Abraham Lincoln!"

On his way from being an unknown politico from the Chicago Democrat machine to purchasing the presidency by spending more money than any candidate in history, Obama has tried on several personas. He was Martin Luther King for a while, and he experimented with being JFK. Then about a year ago he apparently decided that he was Abraham Lincoln.

His over-inflated ego seems to compel him to constantly force references to Lincoln (always in reference to himself) into speech after speech. I have put up with dozens of these ridiculous comparisons of Obama to Lincoln without complaint. But the train was just too much.

Bad enough that he will be sworn in using the Bible that Lincoln used. And of course no place would do to start his inaugural extravaganza except the Lincoln memorial. But to slavishly copy Lincoln's 1861 train trip to the Capitol to take office, right down to the route, was simply pathetic. He really needs to get a personality of his own.

It's not as if he needed to travel to Washington, DC. He's been there for a couple of weeks. He had to leave DC and travel to Philadelphia to board the train for this absurd day-long publicity stunt. In his inaugural speech he plans to tell us that we all need to sacrifice. Then why does he spend millions on extravagant ego-stroking indulgences like the Greek temple at his convention and this private train trip?

Princeton historian Sean Wilentz wrote that comparisons of Obama to Lincoln are "absurd" and "tortured." Wilentz said in an interview: "To say that a guy who hasn't served a day in the presidency is Lincolnian is ridiculous. Lincoln didn't even become Abraham Lincoln, at least as we know him, until he was president."

One of his oft-repeated claims is that, like Lincoln, he plans to bring his enemies into his cabinet. Unlike Lincoln, who was a Republican, Obama's enemies are Conservative Republicans. If he keeps his promise, which I seriously doubt, the Republicans he chooses won't be real Republicans; they will be RINO's. But if he does emulate Lincoln in choosing his cabinet, what does that prove? He may ride horses at Camp David, as Ronald Reagan did; would that make him a great president like Reagan?

One reason he gives for his claim to be the new Lincoln is that he plans to be a "uniter." In his speeches he implies (none too subtly) that he will bring the country together ala Honest Abe. Well, he is certainly kicking off his fabled non-partisan presidency in a strange way.

Two days before his inauguration his attack dog, Nancy Pelosi, announced on Fox News Sunday that she is "Receptive to the idea of prosecuting Bush Administration officials." The Wicked Witch of the West went on to say, "I think you look at each item and see what is a violation of the law." She was giving a clear message from Obama. And she wasn't the only messenger...

Another member of the Democrat leadership, John Conyers, said on Friday that he plans to set up a "Commission" to "look into whether the Bush Administration broke the law by going to war with Iraq and instituting aggressive anti-terror policies." Conyers is not your typical Liberal blowhard just running his mouth. As the Chairman of the House Judiciary Committee, he has the power to make good on his threats.

Several items jump out from his statement. First, he doesn't want to start another sub-committee investigation to look into Bush's "crimes." He plans to create a "Commission." Congress starts investigations all the time; after all, they have to do something to justify their existence. But "Commissions" are always lengthy, often lasting for years; they are hugely expensive; and they afford great media opportunities for the politicians involved (which is why they go on and on and on and on...).

Second, which "law" did Bush break when he used his Constitutional power to take the war on terror to the terrorists? And if it was so illegal, why did almost every member of Congress (including the hypocritical Mr. Conyers) vote to approve the actions? Finally, since when did aggressively pursuing anti-terror policies become something bad? Bush has kept this nation safe for the seven and a half years since 911, in spite of the fact that most experts predicted more (and worse) attacks. I just hope that Obama can do half as well (although, given his promise to "slash" the military budget, that seems doubtful).

The liberal talking heads on TV have been saying that Pelosi and Conyers do not speak for Obama. They point to his statement a few weeks ago in answer to a question about persecuting the Bush Administration. Obama said, "We need to look forward, not backward." That's just lawyer talk, words without meaning. It's easy for him to fool gullible people by seeming to answer a question without saying anything of substance. You will notice that he did not say he wouldn't prosecute them.

Think about this. Obama has all the power in the Democrat party, and the Democrat party has all the power in Congress. He could get rid of Pelosi and Conyers easily. He couldn't remove them from Congress, but he could absolutely remove them from the leadership. It is inconceivable that they would make such statements on the eve of his inauguration without his permission. Coming within two days of each other, and coming from two of the most powerful liberals in Washington, it is clear that this coordinated announcement was intended to test the waters for an attack on Bush's people.

If the attempt fails, Obama has plausible deniability; just look at his almost-statement on the subject. If the radical wing of the radical party responds to the idea, it will give him an opportunity to embarrass Bush.

I don't see any real danger to Bush or his officials. They have done nothing wrong, and there is no court in the land that would convict patriots for keeping our nation safe.

The problem is that they could be forced to spend hundreds of thousands, perhaps millions of dollars in legal fees, and their lives could be disrupted for years. In the end, they would be exonerated, but at great cost.

Why would Obama and company pursue a course that is doomed to fail? Remember that to a liberal, patriotism is the greatest of crimes. Do you remember the firefighters who were disciplined because they dared to display an American flag on their trucks after 911? Do you remember the border agents who were persecuted by a Democrat prosecutor for protecting our borders? He took the word of a Mexican drug dealer against these brave officers. Do you remember Hillary Clinton defending the "right" of so-called sanctuary cities in the US to defy the law by refusing to cooperate with immigration officials? And do you remember when California authorities refused to stop illegal immigrants from desecrating our flag by removing it from a federal facility and raising the Mexican national flag in its place? These are just a few from among thousands of examples.

The bottom line is that patriotism is an affront to people who live for the day when our national sovereignty is relinquished to the New World Order. Obama was elected by the liberals because he is completely on board with their plan for the US to eventually become part of a one world government. And masquerading as Abraham Lincoln cannot disguise this agenda.

Lincoln would gag if he could see all of this.

A QUICK NOTE ON FAIRNESS

On an unrelated subject, if you ever doubted that the liberal media has absolutely no shame when it comes to overt political bias, here's proof positive. On Friday during their morning news shows one of the three major networks (CBS) completely ignored President Bush's farewell speech to the nation, and the other two grudgingly gave him a few seconds of air time.

During the two hours of "Good Morning America" (ABC), Bush was mentioned for 17 seconds! In four hours NBC's "Today" show provided 38 seconds of information about the address. Neither showed a single clip of the actual speech; their 55 total seconds of coverage consisted entirely of their "commentary." Apparently the networks had too many vital topics to explore, including segments on a company that sells Obama "thongs," and a fascinating expose of cheddar biscuits. These upstaged coverage of a man who has served this nation with honor for the last eight years.

Whether the networks like it or not, and whether they approve of his politics or not, the nation whose airwaves they monopolize has a right to hear the last speech of its Chief Executive and Commander in Chief.

Last March Obama was just a candidate. But the day after his speech on race the same three network morning shows aired a total of nine and a half minutes of clips of him speaking. That's more than ten times the coverage they gave the President. Their arrogance seems to know no bounds.

I very seldom suggest anything like this, but I would like to encourage you to call your local CBS, NBC and ABC affiliates. They are much more sensitive to public pressure than the national networks. Tell them that you mightily resent their one-sided coverage and their cheer-leading for one political party while ignoring the other. Remind that that not only is it unfair, it is a violation of federal law. (But don't hold your breath waiting for an Obama administration to enforce the law.)