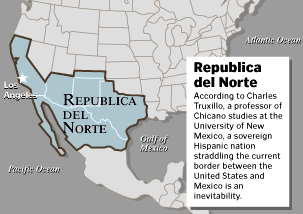 At the current rate of invasion (mostly through Mexico, but also through Canada) the United States could be completely over run with illegal aliens within two decades. I’m not talking about legal immigrants who follow US law to become citizens. If we do not stop the invasion, ILLEGAL aliens and their offspring could become the dominant population in the United States.

They will have gained such influence over our political and social systems that they could have more influence than our Congress over how America is governed. The consequences of ignoring our Constitution will be catastrophic.

The millions of illegal aliens streaming into the US are the foundation for what could be another attempt at secession by several US states. Many of them will use ill-conceived programs that reward illegal immigration to become US citizens. Other illegals will simply go to the polls and vote without taking the trouble to apply for citizenship. Together, these groups could form a voting block that could tear our nation apart.

The map above shows the borders of a new nation proposed by influential Mexican nationals and Hispanic US Citizens. (See LINK below: Professor Predicts 'Hispanic Homeland'.) It includes six northern states of Mexico, as well as Texas, New Mexico, Arizona, California and southern Colorado.

In case it is too small to read, the legend on the map above states: “According to Charles Truxilio, a professor of ‘Chicano Studies’ at the University of New Mexico a sovereign Hispanic nation straddling the current border between the United States and Mexico is an inevitability.”

Listen to what some Mexican government officials and US leaders (including politicians and Professors at taxpayer-funded Universities) have to say on this subject...

Jose Angel Gutierrez, professor, University of Texas, Arlington and founder of La Raza Unida political party screams at rallies: "We have an aging white America. They are dying. They are ******** in their pants with fear! I love it! We have got to eliminate the gringo, and what I mean by that is if the worst comes to the worst, we have got to kill him!" (See LINK below.)

Richard Alatorre, Los Angeles City Council "They’re afraid we’re going to take over the governmental institutions and other institutions. They’re right. We WILL take them over.”

Mario Obledo, California State Secretary of Health, Education and Welfare under Jerry Brown, who was awarded the Presidential Medal of Freedom by Bill Clinton says, “California is going to be a Hispanic state. Anyone who doesn’t like it should leave."

Proposition 187 was the California initiative supported by a majority of Californians that denied taxpayer funds for services to non-citizens. Speaking at a Latino gathering in response to Proposition 187’s passage in 1995, Art Torres, the Chairman of the California Democratic Party, said: "Power is not given to you. You have to take it. Remember, 187 is the last gasp of white America in California."

Augustin Cebada of the Brown Berets: "Go back to Boston! Go back to Plymouth Rock, Pilgrims! Get out! We are the future. You are old and tired. Go on. We have beaten you. Leave like beaten rats. You old white people. It is your duty to die. Through love of having children, we are going to take over.”
The national newspaper of Mexico, Excelsior: "The American Southwest seems to be slowly returning to the jurisdiction of Mexico without firing a single shot."

Gloria Molina, Los Angeles County Supervisor: "We are politicizing every single one of these new citizens that are becoming citizens of this country...I gotta tell you that a lot of people are saying, ‘I’m going to go out there and vote because I want to pay them back.’"

Jose Pescador Osuna, Mexican Consul General: “We are practicing ‘La Reconquista’ in California." "Reconquista" means the reconquest of the US Southwest by Mexico. (See LINK below.).

These people are serious! They think they are going to take US territory. The Mexican President declared it here in our country, and Bill Clinton signed a Presidential Executive Order that paves the way for at least part of Mexico’s dream.

Mexican President Ernesto Zedillo said in Chicago on July 23, 1997, "I have proudly affirmed that the Mexican nation extends beyond the territory enclosed by its borders and that Mexican migrants are an important – a very important – part of this. For this reason, my government proposed a constitutional amendment to allow any Mexican with the right and the desire to acquire another nationality to do so without being forced to first give up his or her Mexican nationality."

Translation: It is next to impossible to receive Mexican citizenship unless you can prove you are of Mexican descent. But Mexico knows that the US has soft immigration laws and will grant citizenship to almost anyone. (After all, we grant citizenship every day to immigrants from countries who have sworn to destroy us.) So Mexico wants to take advantage of this ridiculous situation by encouraging their citizens to apply for US citizenship while keeping Mexican citizenship. That way the Mexican government can influence the political process here in the US.

It is obvious to me that Mexico is not an ally of the United States, regardless of the statements to the contrary by slick politicians in Washington. For instance, in spite of extradition treaties requiring it to do so, the Mexican government has NEVER extradited a Mexican national accused of murder in the United States.

Executive Order 13122, signed on May 25, 1999, by Bill Clinton, established an Interagency Task Force on the Economic Development of the Southwest Border. Part of the Order reads, "The Southwest Border or Southwest Border region is defined as including the areas up to 150 miles north of the United States-Mexican border in the States of Arizona, New Mexico, Texas, and California."

According to experts on international law, this sets the stage for a 150-mile-wide “Border Zone” that will neither belong to Mexico or the US. This could then become the first area of a Hispanic Nation that would eventually encompass the areas shown in the map of the proposed Republica del Norte (The Northern Republic).
Our government, pushed by liberal Democrats, has been systematically laying the groundwork for such a breakaway republic. Did you know that immigrants from Mexico and other non European countries can come to this country and get preferences in jobs, education, and government contracts? It’s called affirmative action or racial privilege.

Some time ago a vote was taken in the U.S. Congress to end this practice. It was defeated. Every single Democratic senator except Ernest Hollings voted to maintain special privileges for Hispanic, Asian and African immigrants. They were joined by thirteen Republicans. Bill Clinton and Al Gore have repeatedly stated that they believe that massive immigration from countries like Mexico is good. They have also backed special privileges for these immigrants.
Mexico, a nation that has benefited enormously from American generosity is now working to destabilize our country. Is “destabilize” too strong a word? I don’t think so.

Whether or not Mexican leaders think they can actually create enough hatred against “gringos” to accomplish the creation of a new republic made up of mainly US territory, they know that pushing that agenda will cause huge political problems here and allow Mexico to accomplish many of their goals. Is the government of Mexico behind this? You've seen quotes from a Mexican President and a Mexican Consul General in support of it. They have everything to gain and little to lose by pushing it. 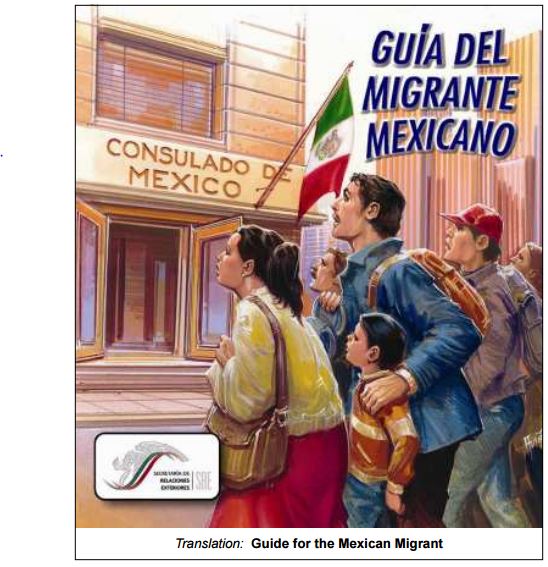 The Mexican government is also pushing illegal immigration, which destabilizes our economy. A NY Times article (see LINK below) describes a pamphlet published by the Mexican government publication showing their citizens the best way to illegally enter the US and how to live there without being detected. Millions of these have been distributed. Why? It takes the strain of taking care of unemployed Mexicans off the Mexican treasury and puts it on the US treasury. And when the illegals get on welfare, they send some of their money home, which helps the Mexican economy. (A copy of this manual had been posted on the US Border Patrol website, but has been removed.)

All this talk by Mexican and US officials about the US illegally occupying Mexican territory does nothing but breed racial hatred. The sad thing is that none of this is about race. It is about the things that all wars and conflicts are about: Greed, power and money.

I don’t like to talk about a problem without offering a solution. The US politicians and professors who advocate taking US territory are guilty of sedition. Remove them from their offices and (hopefully) put them in a federal penitentiary where they can consider the error of their ways. The Mexican politicians who do the same are guilty of inciting sedition. This is very close to an act of war. Immediately cut of all economic aid to Mexico until its government publicly disavows this lunatic plan.

Finally, we should use troops to guard our borders, because the US Border Patrol cannot cover the huge US-Mexico border without help. And we need to pass laws that will stop the government from rewarding illegal immigrants at the expense of those who follow the law. We have a huge immigration problem in this country. This ridiculous Hispanic Homeland idea is just a symptom of the problem.

This article was first published 11 years ago. None of the facts have changed - only the statistics. Predictably, today we are far closer to being overrun by illegal aliens that we were in 2005. Then we had 8.2 Million illegals that the government acknowledged. Today that number is at 11.4 Million. And, of course, any thinking person is aware that for many decades the US government has systematically understated the number of illegals for political reasons. According to many Conservative organizations the number is far higher, and for obvious reasons: Illegals do not fill out US Census forms. 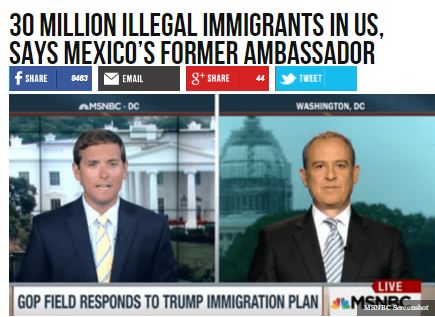 A 2005 Bear-Stearns report stated that there were really 20 Million illegal Mexicans in the US. That number was recently echoed by an American Border Patrol Agents organization. And none other than the former Mexican Ambassador to the United States Arturo Sarukhan stated in a 2015 CNBC interview that there are 30 Million illegal aliens living in the US. Whatever the actual number, it is too high. This situation endangered US security, bobs and the economy in 2005. All of those dangers are magnified today.

The "Reconquista" or Reconquest of the US Southwest by Mexico
http://www.newnation.org/NCR/reference/NCR-Reconquistas.html

Excerpts from the Mexican Government Guidebook for Illegals
https://www.eagleforum.org/topics/amnesty/Mexican-Guidebook.pdf