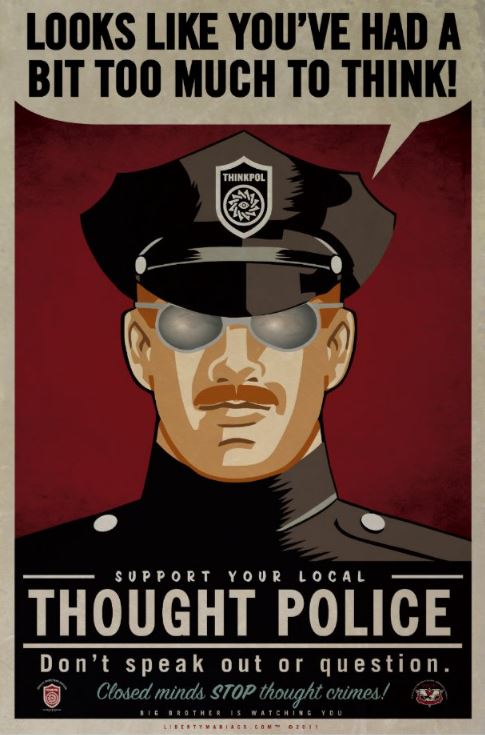 Not only are Pelosi, Schiff and Nadler the most inept politicians in history. They now believe that they can impeach our president for what they think he thinks. I’m not kidding. Apparently they have been reading Orwell’s famous book, “1984.”

After the House Intelligence Committee – which could use a name change – issued their “report” on their unconstitutional secret hearings, the House Judiciary Committee issued an amazing 55 page report in which they claimed the president didn’t actually have to commit a crime. All he had to do was think about committing a crime, and he could be impeached.

Let’s break this down. The sole grounds for the impeachment of a president is proof that he has committed “High Crimes and Misdemeanors.” “High Crimes” – no question, those are crimes. “Misdemeanors” – under the law misdemeanors are less serious crimes that do not rise to the level of a felony. Unfortunately for the Democrats, the Constitution doesn’t require proof of “High Crimes, Misdemeanors, or Thought Crimes.”

Perhaps they can be forgiven for their abject ignorance of the Constitution, the law, and their own job responsibilities because they brought in three Trump-hating “Constitutional Scholars” who told them just that.

The three witnesses chosen by the Democrats were all biased Liberals who have long said that the president shouldn’t be allowed to remain in office. One was an Elizabeth Warren donor who – by her own admission - hates Donald Trump so much that she said she can't walk in the sidewalk in front of a Trump property. She took time during her testimony to mock the president’s child. You had someone who said that you didn't actually need evidence for impeachment!  Another was a political operative who was integral to the anti-Brett Kavanaugh smear operation when he was working for Democrat Dianne Feinstein. If the Democrats wanted to give at least an appearance of fairness, these are not the type of witnesses they should have selected.

These witnesses were Noah Feldman, aHarvard Law professor who is also a columnist at Bloomberg Opinion (which is owned by one of Trump’s political rivals, Michael Bloomberg). There he wrote a hit piece called “Trump’s Quid Pro Quo Is Unconstitutional.” He condemned the president even before testifying. That alone made him an inappropriate and obviously biased witness.

Michael Gerhardt is a UNC professor who told Slate that the president has “dismissed the rule of law as being relevant to his life.” He claims the president has “obstructed justice,” a reference to the Russia hoax in which the Democrats outrageously claimed that Trump was a Russian a secret agent. You can’t “obstruct justice” by refusing to cooperate with an investigation of a crime that exists only in the minds of sick Trump haters. He also stated that the President “…has refused to comply with more subpoenas than most people can count.” Some Constitutional scholar. Apparently he has never heard of Executive Privilege, and is so ignorant of history that he doesn’t realize that almost every president in modern times has done the same.

Their third witness was a real prize. Pamela Karlan is alaw professor at Stanford who was once seriously considered by Obama as an appointee for the Supreme Court seat of Justice David Souter. She donated thousands of dollars to Obama and Hillary, claiming it was “charity.” Anyone that close to Obama is by her nature a Trump hater who should not have been allowed to testify. But it’s not just her nature – she has admitted publicly that she has a bitter hatred for the president, so much so that she has publicly attacked his family. On a podcast named “Versus Trump,” she also expressed contempt for Conservatives, saying that “they don't even want to be around each other.”

As a group, they claimed that the weight of the evidence produced in the Intelligence Committee hearings proved impeachable offenses. But, as one Congressman pointed out, even the members of that Committee, and no one on the Judiciary Committee where they were testifying, had had time to read the report – so how did they know what “evidence” had been produced? The Intelligence Chairman, Democrat Schiff, produced the report in secret, and no one on the Committee (including his fellow Democrats) saw it until he produced it and told them they had 24 hours to review it.

It was clear to anyone watching the hearings that there was absolutely no evidence that the president had committed any crime. So they switched gears. The gist of their “expert testimony” was that it was not necessary to prove that a crime had been committed – just that the president had thought about or considered committing a crime. They didn’t explain how they could read his mind and determine whether his thoughts were impeachable. Frankly, if everyone in America (including myself) were to be prosecuted for our thoughts, everyone would be in prisons.

I will close with the one constitutional expert who was chosen by the Republicans. Unlike the Democrats – who only chose Trump haters - they didn’t look for someone who was a Trump supporter. They wanted someone who actually was a constitutional scholar. Jonathan Turley did not vote for Trump, and even admitted that he didn’t really like him. Just as a judge must render his opinions based on the law and the Constitution whether or not he likes the defendant, Turley did his job in a professional way.

He made it clear that Trump had made mistakes, and had done things that Turley personally opposed. But he was just as clear that, regardless of the fanatical statements made by the other three, you cannot overturn an election in which millions of people had voted for a president, and remove him from office because you hate him. Trump had committed no impeachable offenses, and the whole impeach effort was a political sham.

Jerry Nadler, Chairman of the House Judiciary Committee, which has recommended an impeachment vote against Trump, made this statement: “There must never be a narrowly voted impeachment or an impeachment substantially supported by one of our major political parties and largely opposed by the other. Such an impeachment would lack legitimacy, and would produce divisiveness and bitterness in our politics for years to come.” Of course he made this statement at the time of the impeachment of sexual predator and adulterer Bill Clinton. In recent times he has been the major cheerleader for impeachment.

However, until recently, Nancy Pelosi heeded Nadler’s earlier advice. Just nine months ago, Ms. Pelosi declared flatly in an interview with The Washington Post Magazine that she was “not for impeachment” because it would be “so divisive to the country that unless there’s something so compelling and overwhelming and bipartisan, I don’t think we should go down that path.” She also said that unless there was overwhelming support for impeachment, it would fail.

So what changed her mind? For insight into this, read my article, “Democrats' Christmas Gift to America – a Hasty Impeachment to Help them in 2020.” Back in June, I implored the Democrats to impeach the president, because it would absolutely guarantee his reelection in 2020. Apparently the Democrats were dumb enough to force Pelosi into taking my advice. NOTE TO DEMOCRATS: Never take advice from a Conservative.

Anti-Impeachment Witness Received Threat while he was Still Testifying; Callers Demanded that he be Fired from his positions as a Law Professor at George Washington University
https://www.cnn.com/2019/12/05/politics/jonathan-turley-impeachment-expert-congress/index.html

Democrats' Christmas Gift to America – a Hasty Impeachment to Help them in 2020
http://www.conservativetruth.org/article.php?id=7767