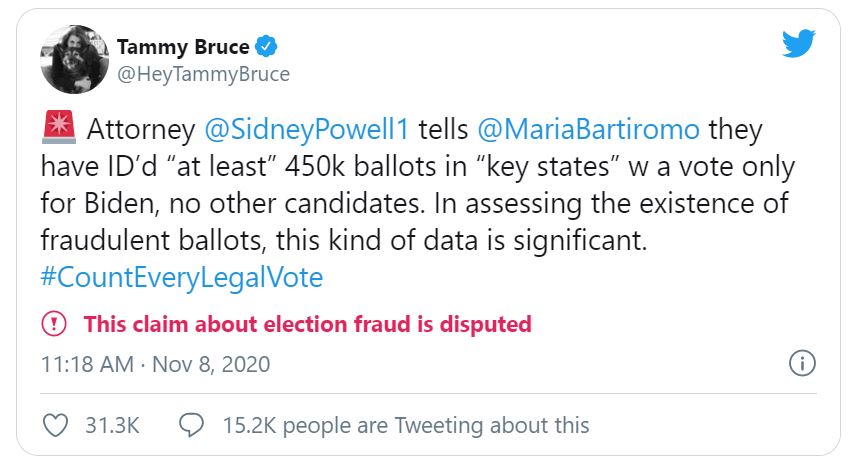 Democrats have committed voter and election fraud in every election - local, state and federal - for decades. But they have honed their skills in recent years, and have developed expertise that rivals that of any Communist dictator in the world. As I brought out in my article, "How Can I Cheat Thee - Let me Count the Ways," they have spent the last four years developing new and innovative ways to lie, cheat and steal the presidency fom our President. Today we will look at just six of the most effective ones.

I’ll keep this introduction short, and let the FACTS below speak for themselves.
Not surprisingly, more Republicans than Democrats believe that fraud played a big part in the presidential election. What is interesting is how the perceived results (the idea that Joe Biden is the President-elect because the media says so) changed attitudes.

Before November 3rd only 52% of Democrats thought the election would be “free and fair.” Now that they think their guy won, 90% tell the pollsters they think the election was kosher. I suspect the majority of these know that is not the truth, but don’t care.

Republicans were more pragmatic. Before election day, only 35% of Republicans thought the election would be honest. After seeing the sworn testimony of election and postal works who observed the fraud taking place, 70% of Republicans now believe there was massive fraud.

However, the real proof is in two striking political facts that never change.

A popular president like Trump “carries” many weak candidates in his party to victory. The other Republicans on the ticket (called the “down-ballot” candidates) benefit from his popularity. Millions of voters turn out in a presidential election that don’t turn out in the mid-term elections. In fact, Trump received more recorded votes than any Republican in history – in spite of the hundreds of thousands of Trump votes that were switched to Biden by the rigged election machines in Democrat states.

But despite these FACTS, Trump supposedly did worse percentage-wise than the down-ballot Republicans. That is worse than ridiculous. It would be easier to believe that Nancy Pelosi was honest, or that Joe Biden didn’t know about his son’s crimes than to believe that this could happen. The only possible explanation is systemic voter fraud and corruption paid for by billionaires like George Soros and Bill Gates – both of whom hate the President.

Here’s the other FACT. There is a very small minority of voters who only vote for the presidential candidates. Either they don’t take the time to inform themselves about the other candidates on the ticket, or they only care about who becomes president. Whatever the reason they fail to vote for other candidates, the fact is that the vast majority of Americans of all parties vote for the down-ticket candidates when they vote for president. The data used by one Liberal publication that claimed that voting only for the presidential candidate is “very common” showed that less than 3% did so.

In this election, an astounding number of people supposedly voted only for Biden. The true number will never be known because security video has emerged that shows shredder trucks pulling up behind Democrat vote-counting facilities to destroy ballots that had been “counted” – and thus preventing an honest recount. But sworn testimony by poll-watchers of both parties as well as some with no party affiliation – given under penalty of felony perjury – shows how this happened.

These whistle-blowers observed hundreds – and in some cases, thousands – of blank ballots being marked only for Biden. Apparently, the rigged voting machines - which had a “back door” that allowed Democrats to see in real-time how many votes had been cast for each candidate – warned them that they needed more votes. Since there wasn’t time to properly fake the ballots by marking votes for the down-ballot candidates, they only “voted” for Biden.

I know it’s hard for normal patriotic Americans to believe that such evil exists, but things like this happen in every election. The 2000 contested Bush-Gore election was decided by just 535 Florida votes – and I was right in the middle of it. I interviewed one of the judges who ruled on the recount, and I was a Republican observer of the recount. (Unfortunately, Trump observers were not allowed in the room during the ballot-counting in several states – another felony violation of election laws.)

Early in the morning the day after Election day the votes from two heavily Republican precincts could not be found. By law, locked and sealed boxes of ballots can only be transported by official County vans. Many hours after the ballot boxes had been taken from the polling sites, it was determined that the votes for Gore were sufficient to win my county, Palm Beach – even if all the ballots from the missing precincts were for Bush. Miraculously, two private vehicles with the ballot boxes illegally in their trunks appeared. Both drivers claimed they had been lost – in the county where they lived! Everyone knew what would have happened if Bush had been winning – those boxes would have disappeared forever.

VOTE-COUNTING FRAUD FACTS:
FACT: Major cities tightly controlled by Democrats are the easiest in which to commit fraud.
FACT: Without the fraudulent votes of major US cities, Biden wouldn’t be close.
BIG FACT: Biden “won” in these major cities at more than triple the percentage of the rest of the cities and counties in those same states. Coincidence?

VOTER SUPPRESSION FACTS:
FACT: The mainstream media ignored or denied important facts voters needed to know.
FACT: 45% of Biden voters didn’t know about the financial scandals of his son, Hunter, or that the FBI was investigating him on multiple criminal charges.
FACT: 35% of Biden voters were unaware of his former aide Tara Reade's allegation that Biden sexually assaulted her on Capitol Hill.
FACT: 25% of Biden voters didn't know that Sen. Kamala Harris was ranked America's most "progressive" senator.
FACT: 51%, did not know the United States became energy independent of Arab oil for the first time in 2019.
FACT: 49% of Biden voters had no idea economic growth rebounded by 33% in the third quarter of this year – the largest growth in US history.
FACT: 45.3% of Biden voters had no idea that President Trump had brokered numerous historic agreements between Israel and Arab nations that made Israel safer.
FACT: Shockingly, 36% of Biden voters said they did not know about the administration's critical role in promoting coronavirus vaccine research and the development of a vaccine through Operation Warp Speed in less than eleven months. (The fastest development of a vaccine in history prior to this had been four years. Dr. Fauci has been in charge of developing an AIDS vaccine for four decades; no vaccine exists.)
BIG FACT: 17% (one of every six) of Biden voters in the key swing states said they would not have voted for him had they known these facts. This would have been more than enough votes to produce a decisive Trump win.

BIG TECH CENSORSHIP FACTS:
FACT: Most Americans get their news from social media.
FACT: The social media giants freely admit that their employees are Democrats, Liberals, or Socialists
FACT: Regardless of qualifications, no open Trump supporter could get a job from them.
FACT: Social media executives admitted to censoring Conservative, Christian, & Republican content, but claimed they were mistakes; when pressed, they could not point to one such mistake in which they censored Democrats, Liberals, or atheists.
FACT: When they couldn’t outright censor a post, they put “Warning” labels on them (such as the one shown above); they never did this on disputed posts by Democrats and Socialists.
FACT: Trump has been working to remove special protections Facebook, Twitter, Google, and others enjoy from lawsuits over censorship and unfair business practices.
BIG FACT: Big Tech and its social media platforms actively promoted positive content about Joe Biden, while censoring and blocking anything positive about President Trump. In effect, they were part of the Biden-Harris campaign team.

MAIL-IN VOTING FACTS:
FACT: Absentee ballots are a safe and proper way for handicapped people or people out of the country (such as military personnel) to vote. They must be requested in writing and signed, and the signature is verified before the ballot is mailed.
FACT: Democrat states violated their own laws by mailing millions of ballots to everyone on their voter rolls, without verifying if the people still lived in the state or were even alive.
FACT: Hundreds of thousands of those ballots were illegally “harvested.”
FACT: Vote Harvesters often use intimidation or bribes of money or booze (both illegal) to induce the poor and elderly to turn their ballots over.
FACT: Many ballots are stolen from mailboxes before the resident sees them.
FACT: Vote harvesting is illegal in almost every state.
FACT: The vote harvesters were hired by Democrat operatives.
BIG FACT: If all the illegal mail-in votes were excluded, Trump would have won in a landslide.

ILLEGAL CHANGES TO ELECTION LAWS FACTS:
FACT: Eight states – all Democrat-controlled – changed their election laws just a few months before the 2020 election – a clear violation of both the US Constitution and their own constitutions.
FACT: Republicans fought to maintain the law that votes must be cast on or before Election Day.
FACT: Democrats sued to create Election Weeks or Months. They tried – and in some cases succeeded – to make early voting earlier and earlier, and to allow voting after the legal deadline. They used the pandemic as an excuse – as if early voting somehow didn’t provide sufficient time because of the Virus.
BIG FACT: Federal and State laws have always prevented the last minute changes that have caused such confusion in this election, and have allowed the Democrats more time to perpetrate their crimes.

ILLEGAL VOTER FACTS:
FACT: Republican states have the safest election laws in the nation, with proof of identity and registration to vote required before a person’s vote is counted.
FACT: Democrats consistently oppose attempts to change their laws that allow people to vote with no identification, and no proof that they are registered voters.
FACT: Democrats require a photo ID to enter their conventions; but claim it is “discriminatory” to require proof of identity to engage in our most important civic duty – voting.
FACT: Democrats claim that black people are incapable of obtaining government photo ID – a major insult to black people.
FACT: Every state offers photo identification cards to anyone who doesn’t have a driver’s license.
FACT: Illegal immigrants are able to vote in Democrat-controlled states using these loopholes.
FACT: Democrats actively work to register felons to vote – even though it is illegal in most states.
FACT: Illegals and ex-convicts benefit from Democrat policies such as easy welfare registration requirements that allow people to draw welfare checks from multiple states.
BIG FACT: No one can say with certainty whether illegals, felons, or people who illegally register to vote will vote for Democrats. But the fact that Democrats spend millions in lawsuits to allow such illegal activities certainly indicates that Democrats believe they will vote for Democrats.

One In Six Biden Voters Would Have Changed Their Minds if They Had Known the Full Story
https://www.timesfreepress.com/news/opinion/freepress/story/2020/nov/26/cooper-biden-voters/536784

Americans Are Getting Their News from Social Media; 55% from Facebook
https://www.forbes.com/sites/petersuciu/2019/10/11/more-americans-are-getting-their-news-from-social-media/?sh=fb8f11a3e179

Mail-In Ballots Make Voter Fraud Easy. I Know Because I Did It.
https://www.sun-sentinel.com/opinion/commentary/fl-op-com-menge-mail-in-ballots-fraud-florida-20200416-hanmbneuendpbaftyktpactlga-story.html

The Threat of Ballot Harvesting
https://republicans-cha.house.gov/threat-ballot-harvesting