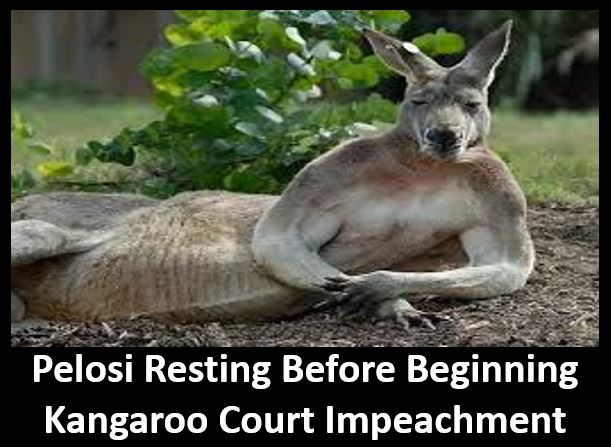 Totalitarian governments don’t have many problems in their “legal” systems. They can choose to shoot people they don’t like on sight. This is quick, easy, and private. They can also choose to have show trials in which the outcome is pre-determined. The accused can either plead guilty, in which case he may get a lighter sentence, or executed without being tortured. Or he can be found guilty, usually without having been given a chance to defend himself or to have an attorney.

We haven’t quite gotten to that place, but the “Snap Impeachment” engineered by the corrupt Nancy Pelosi has many parallels to trials in Communist countries like China, Cuba, and Russia. She called the House back to DC, and after a few hours of “debate” rushed a vote to impeach the President of the United States in her Kangaroo Court. The President was not given the opportunity to defend himself, nor to have an attorney present. She would have had him shot immediately following this travesty, but wisely realized that the Secret Service would have problems with that.

She knew that, just like her previous sham impeachment, there was no chance the president could be legally tried and found guilty. But just like the last time, her goal was not to remove President Trump from office by impeachment. There was simply not enough time for the House to impeach him and for the Senate to hold a trial - in which he would almost certainly be found not guilty. Her purpose was to shame and ridicule him.

With just ten days of his term left, she wanted to be able to gloat that she, the self-described “Master Legislator” openly admitted that she was using the threat of impeachment to force Mr. Trump to resign. That didn’t work, because the President doesn’t take well to threats. Then she tried to use threat of a trial to force the Vice-President to remove the president using the 25th Amendment. Again, she was very open about the fact that she was using extortion to try to get Pence to act illegally.

As I described in my article, “The Vindictive Wicked Witch Displays Her Rage”, the 25th Amendment, Section 4, can only be used by the Vice-President and the President’s Cabinet to oust him if “… the President is “unable to discharge the powers and duties of his office.” No one can argue that he is unable to discharge his duties. He is five times more physically fit than Joe Biden, and has ten times the mental acuity of Slow Joe.

After blackmail and extortion failed to force the president to resign or the Vice-President to try to remove him from office, she resorted to humiliation. She spoke to the Chairman of the Joint Chiefs of Staff, General Mark Milley, about whether an “unhinged” President Trump would be able to launch nuclear weapons. Afterward she lied to the press, telling them that he assured her he would not allow the president to launch nuclear weapons.

A smart reporter followed up and was told by Milley’s spokesman that Pelosi had indeed spoken with the General, but that her claims were untrue. The president has the sole authority to launch nukes; if China launched nukes at us, there would only be minutes to make a decision. This would not be the time for a committee meeting. And any military officer who disobeyed such a command would be court-martialed for treason, a crime which carries the death penalty.

This has been a popular Democrat “boogyman” for the last four years. “Trump is crazy, he is impulsive, he might start a war in his last ten days just for fun.” All the facts dispute this. He has gotten us out of numerous wars that Obama got us into or made worse. He has used military power very judiciously because he really cares about our servicemen. After Obama called ISIS the “JV” (Junior Varsity) team and allowed them to take over a huge part of the Middle East equal to the size of Iraq, Trump defeated the terrorist organization – and then brought almost all our troops home. Any honest group of military people would vote him the “least likely to start a war.”

Pelosi’s fake impeachment has just one count: the ridiculous claim that President Trump incited a mob to riot. In my article last week – “One of the Three Worst Days in our Nation’s History” I remarked on the fact that all the organizations who were supposed to keep the Capitol safe, including the Capitol Police, the FBI, Homeland Security, and the Secret Service told the same story. They didn’t have an adequate security presence because there was no threat of violence.

I asked the question: “Why were they so casual in their preparations? It was because they had seen many Trump, Tea Party, and other Christian and Conservative groups demonstrate peacefully with no problems. These people even picked up their trash as they left, because of their respect for our nation and its institutions.”

Well, it turns out the FBI lied – again. Before the breach of the Capitol, the Special Agent in Charge of the Washington field office said the FBI had no reports of any threats. After the event, the Washington Post printed a memo received by the Agent in Charge that was full of very specific threats, including a “call to war.” He was forced to admit that he had lied. When asked by a reporter what he had done about it, he replied that he had made a report to the “task force.” In other words, he did nothing. He didn’t even tell the people protecting the Capitol.

So it is clear that the President did not incite a mob to riot. Watch the video. Read the transcript. Pelosi and the members of the House knew this. The “Second Impeachment” is all for show. There was no mob; just peaceful supporters listening to a speech. There was no incitement. In fact, the President asked the assembled Patriots to walk down to the Capitol “peacefully and patriotically.”

Later a few hundred people, out of several hundred thousand, turned violent. But as the FBI memo (which they attempted to hide) proves, the violence had already been planned by anarchists before Trump gave the speech for which they intend to impeach him. Again, the House knew all this before it was on the news. But they went through with their unconstitutional sham impeachment anyway, just to embarrass the President.

There were ten Republican turncoats in the House, led by Liz Cheney of Wyoming, who voted to impeach their President. Cheney, the highest-ranking Republican House member, will soon lose that position. She has never been a real Republican. She only chose that party because her father is a former Republican Vice-President. She has ridden on his coattails since she got into politics.

The rest are nobodies that I’ve never heard of, trying to either make a name for themselves, or to ingratiate themselves with the Liberal voters in their districts. I will list them so that you can make sure to vote against them if you are unfortunate enough to be one of their constituents. These cowards don’t deserve to have Republican next to their name on any ballot:

Finally, let’s look at the Senate. Even though every Constitutional scholar who has commented on this kangaroo court pushed by the evil Nancy Pelosi has said that only a sitting official can be impeached, the cowardly lion of the Senate has agreed with Pelosi that an impeachment trial can take place AFTER President Trump leaves office. He has been a disgrace for a long time, caving in to the Democrats over and over. But this treachery beats any of his previous betrayals. He claims he is “undecided” on whether he will vote to convict. As the top Senate Republican, that is tantamount to telling those he leads that they have his blessing to vote against his President.

The Republican Senators who will likely vote for impeachment (if the unconstitutional trial were ever to take place) include the usual RINO’s. (In case you didn’t know, a RINO is a Republican In Name Only. These are Liberals whose constituents are Conservative, so they run as Republicans and vote as Democrats.) These include Lisa Murkowski of Alaska, Susan Collins of Maine, and Pat Toomey of Pennsylvania. And let’s not forget the disgusting Mitt Romney. The others are open Liberals who wear Republican masks. But Romney was the Republican nominee who ran against Obama in his second term. He lost because he was a terrible, sanctimonious candidate – stiff and unapproachable. But he has bitterly blamed the Republican Party for his failure. And he hates President Trump because he succeeded where Romney failed.

It takes a two-thirds majority to convict in a senate impeachment trial – a high bar in a chamber that is evenly divided on party lines. But major corporations and other donors have said they will stop donating to the campaigns of Republicans who support the President. So it is possible that more cowards will join the rats already mentioned and vote with the evil ones.

We need to pray that this will not happen. Not just for the President’s sake, but for the sake of the nation. The unjust – and unconstitutional – trial and persecution the Democrats lust for will divide our nation even more. I don’t know how much more division we can handle before the rift literally tears our country apart.

It’s still true: “If My people who are called by My name will humble themselves, and pray and seek My face, and turn from their wicked ways, then I will hear from heaven, and will forgive their sin and heal their land.” (2 Chronicles 7:14)